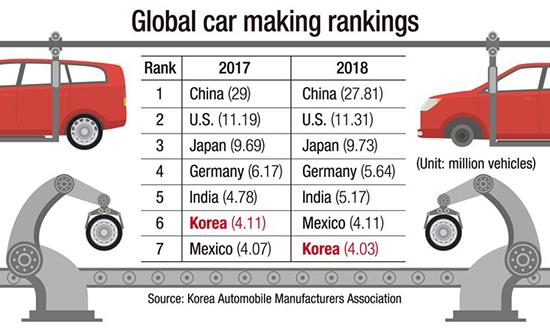 By Nam Hyun-woo –  The  Korea Times

Korean automakers have been falling behind their overseas rivals in recent years as they grapple with confrontational labor-management relations, falling productivity and soaring wages amid the global market slump, according to industry analysts and company officials Monday.

Confrontational labor-management relations, an inefficient manufacturing structure and ill-timed strategies are attributable to the backpedaling, they said. They noted that struggling carmakers have contributed to the country’s falling exports, the main growth engine for Asia’s fourth-largest economy.

According to the Korea Automobile Manufacturers Association (KAMA), Korea produced 4.03 million vehicles last year, down 2.1 percent from a year earlier.

It was the third consecutive year of decline, and Korea was the only country to have such a downturn among the top 10 nations.

Following the decline, Korea became the seventh-largest car manufacturing country in the world, down one notch from 2017, and allowed Mexico to sit at No. 6.

The share of Korea-made cars globally also declined to 4.1 percent, down 0.1 percentage point from a year earlier.

The decline is not a concern for car brands only. Parts suppliers, logistics firms and other related industries are also sending out distress calls.

Of 90 listed auto parts suppliers in Korea, 31 posted losses in the third quarter of last year, up from six in 2015, according to the Ministry of Trade, Industry and Energy. Their average operating margin also plunged to 1.8 percent from 3.6 percent during the same period.

“As carmakers’ manufacturing volume drops, our workload is also dropping,” a logistics firm official said. “Many of our workforce are worrying about job security.”

Experts said the industry-wide suffering is first attributable to the carmakers’ belated response to the emergence of electric vehicles.

“The Korean auto industry is at the bottom of its valley,” Korean Academy of Motor Industry Chairman Kim Yong-jin said.

“The industry has moved onto EVs and SUVs, but domestic carmakers were slow in responding to the trend. Rather than EVs, the Korean industry chose hydrogen cars, but it seems time is required for that to lead to an actual outcome, while its profitability is faltering quickly.”

The number of cars manufactured across the world stood at 98.5 million last year, down 0.3 percent from 98.75 million a year earlier. While the global car market is declining, the market for EVs is showing fast growth every year, with the U.S. market alone growing 81 percent from 2017 to 2018, according to market tracker Inside EVs.

Other factors that dragged down Korean carmakers are the inefficient manufacturing structure and combative labor-management relations.

According to KAMA, Hyundai Motor’s domestic plants took 26.8 hours to produce one vehicle, which was far longer than Toyota with 24.1 hours, General Motors with 23.4 hours and Ford with 21.3 hours. Given those companies produce millions of cars a year, the one or two hours makes a huge difference, Kim said.

This is possible because of militant unions, which oftentimes stage disputes with company strategies. Experts criticize them saying their domain for disputes should cover working conditions and job security only, not the company’s management strategies.

“Global carmakers have been reorganizing their workforces for more than five years, but Korean firms still have to consult with unions over making a new manufacturing line or giving workers new assignments,” Kim said. “To survive in the global competition, companies have to retrain employees and rotate them, but those efforts are frustrated due to unions.”

“Korea’s auto industry is stuck in the combative labor-management relations, bringing the structure of high cost but low efficiency,” a KAMA official said. “This led companies to lose their competitiveness in productivity and let other countries edge out Korea.”