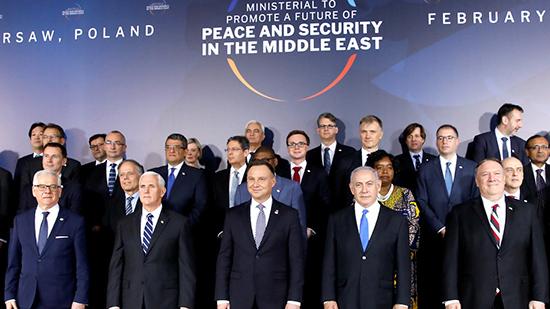 Russia Today
Attended by over sixty countries but widely neglected by key EU nations, a controversial US-led meeting on Iran opens up in Warsaw, raising doubts that European allies will play to Washington’s tune when dealing with Tehran.

A summit to promote “peace and security in the Middle East” is officially set to seek ways of making the boiling region a safer place, but its primary focus is expected to be on Iran. The meeting gathered a host of Gulf monarchs and other arch-foes of Tehran, including Mike Pence, Mike Pompeo, and Israel’s Prime Minister Benjamin Netanyahu.

However, Washington’s key European allies, including France, Germany, and, for the moment, the UK, have downplayed the importance of the offbeat meeting. Jeremy Hunt, the British Foreign Secretary, was in Warsaw to chair a Quad meeting on Yemen but not to take part in the Iran summit.

France has sent a second-tier diplomat and Germany its junior Foreign Minister. Another notable absentee was Federica Mogherini, the EU foreign affairs chief, who helped broker the historic 2015 nuclear deal with Iran. Meanwhile, European press was largely critical of the event, with the Guardian running an op-ed piece saying it shows “just how far [Trump] is from the rest of the West.”

“What about the Warsaw summit, I think it’s dead on arrival or dead before arrival,” commented Mohammad Javad Zarif, Iran’s Foreign Minister. “It’s another attempt by the United States to pursue an obsession with Iran that is not well-founded,” he stated