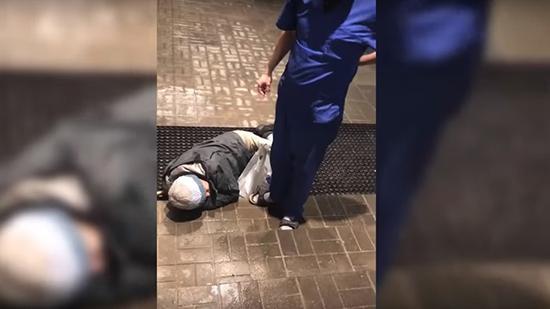 Video from outside a hospital in the Russian city of Petrozavodsk shows a man who was brought by ambulance writhing with cold after a security guard threw him out, telling a witness that it was “no problem” if he died.

The witness, named Denis, filmed the patient lying near the entrance of a Petrozavodsk city hospital. In the video, the man squirms and seems to have trouble talking. A doctor and a nurse come out, and hurry to treat the patient as they review records and discuss his care.

Other witnesses reported that the ill-fated man had arrived in an ambulance, and hospital staff began doing paperwork to admit him, according to local 360 media outlet. But after a while, a security guard stepped in, grabbed the patient and forced him out.

However, Denis, who was visiting his grandfather in the hospital, couldn’t turn a blind eye to what was happening and called the police. He told 360 that he was appalled by what he saw. “I came in and told the guard: ‘You’ve got a man lying at the entrance,’” he recalled. “We don’t need him,” the guard replied after a short argument, adding: “It doesn’t matter if he dies, we’ll send him to the morgue, no problem!”

The security guard was nowhere to be found after police were called. Things then began moving faster and the patient was finally picked up by hospital staff.

Opinions were divided after video of the incident was shared online. Some said the concerned witness had restored their faith in humanity, while others suggested the man was simply drunk or homeless, and probably had no place to go.

The hospital chief was reluctant to comment, only telling the media that he would review CCTV footage and reach out to security guards. “We will find out who he is and where he is,” he said.

It’s not the first time that a Russian hospital has found itself in hot water over its treatment of patients.

Earlier this year, an storm broke out online after it emerged that a hospital in the small southern city of Kuznetsk had ‘beds’made of planks of wood nailed together on top of four chairs. The photos quickly vent viral, prompting the medical facility to go on the defensive, claiming that a sudden influx of patients and a lack of beds had resulted in the emergency measure.