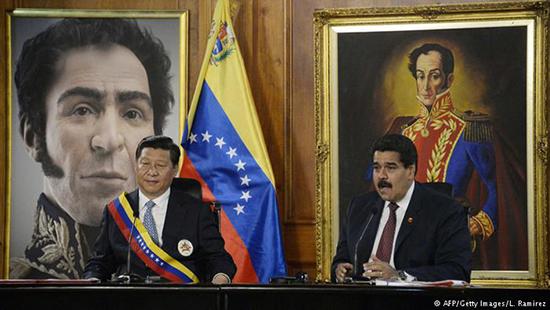 The United States and Russia are odds over the power struggle unfolding in Venezuela. As the two traditional rivals vie for influence, China has been quietly growing its footprint in the region, says Alexander Busch.

When it comes to the crisis unfolding in Venezuela, the United States and Russia have seemingly reverted back to their Cold War rivalry. Indeed, just several days ago US National Security Adviser John Bolton refused to rule out Washington intervening militarily in the Latin American country, saying “all options are on the table.” Bolton also announced the US would freeze all revenue generated through Venezuelan oil exports.

Not only that. According to The New York Times, the Trump administration has now given Venezuela’s opposition leader and self-declared interim president Juan Guaido full control over these funds.

Russian Foreign Minister Sergey Lavrov, meanwhile, has repeatedly warned against the US launching a military intervention in Venezuela. And in December 2018, Russian President Vladimir Putin ordered that two supersonic bombers be stationed in the Latin American country as a show of support.

Unlike the US and Russia, China has struck a more moderate tone regarding the current Venezuelan crisis. The country’s Foreign Ministry has urged supporters of President Nicolas Maduro and Guaido to calm tensions. This innocuous sounding language is reminiscent of a United Nations declaration, but belies China’s long history of support for the Venezuelan regime. Over the past 10 years, Beijing has funneled more than $60 billion (€53 billion) into the country, helping to keep Maduro in power.

No other country in the world has been granted as many Chinese loans as Venezuela — a fact which the Chinese leadership has come to regret. Now that Venezuela is in the global spotlight, it is becoming apparent just how much China has increased its influence in the region over the past 15 years. This unwanted attention somewhat undermines China’s strategic goal of quietly strengthening its grip in Latin America, which is home to 650 million people in 23 different countries, and which the US for over 200 years has considered its global “backyard.”

Back in 1823, then-US President James Monroe announced the Monroe Doctrine which, among others things, stipulated that the US deems the region spanning Mexico to the southernmost tip of Latin America its exclusive sphere of influence. Today, Chinese expansionism is challenging this doctrine — just like Soviet foreign policy did 50 years ago when it sought to use Cuba as a Latin American bridgehead.

Dependence on exports to China

These new geopolitical power games are having unforeseen consequences. Initially, China had sought to secure access to natural resources and energy in Latin America. Today, all of Latin America relies on exporting iron ore, soy, copper and oil to China. China has invested $150 billion in the region, which surpasses its investments in Africa.

Chinese consortia have been acquiring factories, distribution networks and ports in Latin America. The Chinese have been building railways and free trade zones, including a Latin American branch of the New Silk Road, as well as investing in car manufacturing and digital platforms. And 14 countries have since lobbied for Chinese investments. Chile, Peru and Colombia, who each have coasts along the Pacific Ocean, have been vying to become hubs for Chinese imports and they are willing to adjust their politics to this end, as well.

The Dominican Republic, El Salvador and Panama, for instance, last year cut diplomatic ties with Taiwan and instead forged closer relationships with China. Beijing honored this step by agreeing to 20 major infrastructure projects with Panama, which could prove irksome to the US because it relies on the Panama Canal to uphold its regional dominance.

Mexico’s new left-wing liberal president, Andres Manuel Lopez Obrador, has indicated that he, too, is open to Chinese investments. Together with China, he hopes to launch a “Marshal Plan for Central America” worth $30 billion, to finance infrastructure projects, create jobs and halt US-bound immigrants. Not even US President Donald Trump would object to such a deal.

Alexander Busch is a contributor to DW’s Brazilian Portuguese service. A journalist and author, he has been reporting on Latin America for over 25 years and his writing appears in Wirtschaftswoche, Handelsblatt and Neue Zürcher Zeitung. Busch grew up in Venezuela, studied economics and politics in Cologne, and currently lives in Brazil.