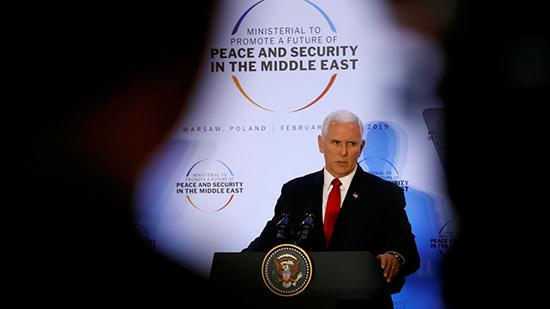 Russia  Today
US Vice-President Mike Pence has demanded that Europe withdraw from the Iran nuclear deal and lashed out at the EU’s efforts to evade Washington’s sanctions on Tehran.

Speaking at a security conference in Warsaw, Pence chastized Europe for leading an “effort to create mechanisms to break up our sanctions” against Iran, and complained that European countries had not been “cooperative” since the Trump administration withdrew from the Iran deal last year.

“The time has come for our European partners to withdraw from the Iran nuclear deal” and join with the US to give the Iranian people and the world “peace, security and freedom,” he said.

Pence said the EU’s newly created Special Purpose Vehicle (SPV), conceived as a way to continue facilitating trade between the EU and Iran, was an “ill-advised step” which would only “strengthen Iran, weaken the EU, and create still more distance between Europe and the United States.”

In January, the EU unveiled a new transactions channel aimed at bypassing the SWIFT international payments system to circumvent US sanctions. The system, called INSTEX – or ‘Instrument in Support of Trade Exchanges’ – has limited capacity and only allows “humanitarian” trade by focusing on sectors “most essential” to Iranian people like food, pharmaceutical and medical devices. While the EU hailed the mechanism as a way to preserve the Iran deal, critics say it won’t change much as European countries still worry about US repercussions if they are “caught” evading sanctions and working in Iran.

Pence said that the US had been “a force for good” in the Middle East and claimed that Trump is committed to standing with “the good people of Iran and stand up to their oppressors.”

He cited the US’ withdrawal from the Iran deal as proof that Washington was making good on that promise, despite the fact that American sanctions, which Pence called “the toughest in history,” have had devastating effects on the Iranian people. He said the sanctions would “get tougher still” until Tehran complies with US demands, and said Washington’s efforts to isolate Iran was a “noble cause.”