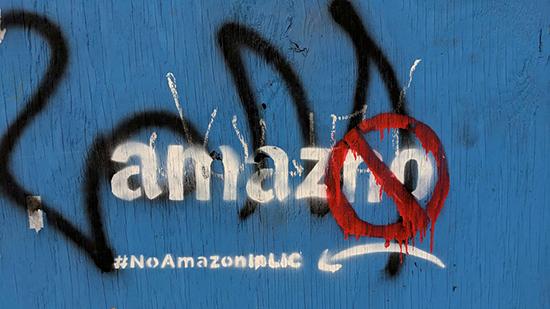 Trillion-dollar-company Amazon skated through 2018’s tax filings without paying a cent for the second year in a row. The e-commerce behemoth, which made $11 billion last year, will pay no taxes at all, thanks to 2017’s tax reform.

Rather than pay the standard 21 percent corporate income tax rate, Amazon is actually claiming a tax rebate of $129 million, which works out to a logic-defying rate of -1 percent. Aside from the nebulous “tax credits,” which the company does not have to spell out in its public filings, Amazon is also claiming a tax break for executive stock options, according to the Institute for Taxation and Economic Policy – a longstanding loophole that permits profitable corporations to dodge federal and state income taxes on almost half their profits.

While President Donald Trump’s 2017 tax reform legislation lowered corporate tax rates from 35 percent to 21 percent, it was sold as an incentive for companies to keep their money in the US, instead of stashing it overseas where the IRS couldn’t touch it. Now that Amazon and Netflix have both made headlines for using the new regulations to avoid paying anything at all, it remains to be seen whether the legislation’s failure to close corporate loopholes will leave the US holding the bag for fiscal year 2018 as the country’s national debt inches past $22 trillion – a record high.

Amazon’s tax windfall doesn’t even take into account the billions in tax breaks the state governments of Virginia and New York offered the company to open a second (and third) headquarters in their states, though there are rumors that New York is getting cold feet about the unprecedented corporate giveaway. Amazon didn’t pay any taxes in 2017 either, though it raked in a comparatively paltry $5.6 billion in profits and extracted a slightly larger $137 million refund.