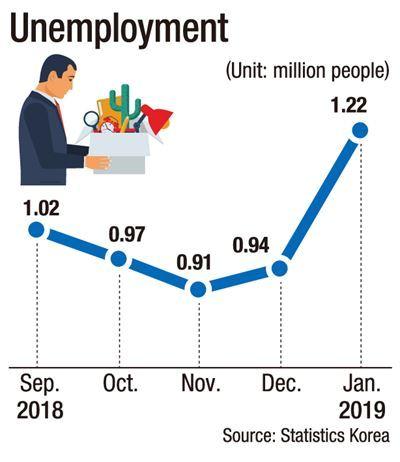 The country’s unemployment rate reached a nine-year high of 4.5 percent in January, amid job cuts in manufacturing, according to Statistics Korea, Wednesday.

The rate climbed 0.8 percentage points from January last year, with the number of the unemployed increasing 204,000 to 1.22 million, the highest figure for that month in 19 years.

This has prompted the Ministry of Economy and Finance to revise its state-run enterprises’ hiring plan and other economic measures for rapid implementation.

Finance Minister Hong Nam-ki said his ministry will seek to have the state-owned companies hire 2,000 more regular workers this year.

The initial plan was to create 23,000 jobs in 2019 in public safety and administration, and disaster and accident prevention.

Hong said his ministry will make sure the plan will not create a “one-off effect,” and that those jobs will be offered full-time.

“We will have the plan ready by next month,” Hong said at a meeting in Seoul.

“We will use all available resources to create 150,000 jobs for all ages this year.”

This will include pursuing projects with the private sector to create jobs for the elderly.

The government started a job program for the elderly in January, and Statistics Korea began recording the number of senior citizens trying to secure such work, the finance ministry and the statistics agency explained.

Previously, they were not included in the economically active population, which includes jobseekers.

Since the launch of the program, the number of senior citizens trying to find jobs has increased the unemployment rate, which also has been affected by the manufacturing job losses.

A slowdown in semiconductors has weighed further on employment, the statistics agency added.

Semiconductor exports fell more than 23 percent in January, negatively affecting the overall export data, given that they had accounted for 20 percent of total annual shipments. In 2018, exports of chips increased nearly 30 percent.

To this end, the finance ministry will rapidly draw up a plan to set up a semiconductor cluster here by the end of March.

Analysts say the job market does not look bright this year amid a slowdown.

“This is because of the inevitable economic slowdown and falling consumption on the back of the aging demographics,” said Lee Sang-jae, an economist at Eugene Investment & Securities.