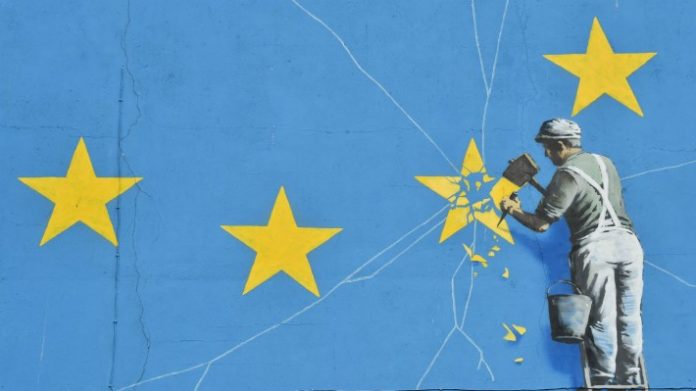 A mural by graffiti artist Banksy on a wall in Dover

The European Union is facing unprecedented threats to its survival, including the rise of the far right ahead of the European Parliament elections this spring.

Research published this week by the European Council on Foreign Relations claimed Eurosceptic parties are on course to take a third of seats in the May elections. This crucial threshold means they would wield enough power to block or curb EU legislation, says the think tank.

“The surge for anti-EU and anti-globalist parties could wreak havoc with the bloc’s foreign and trade policy, as well as paralyse migration policy and efforts to prevent an illiberal drift in some EU countries,” says The Daily Telegraph.

The newspaper says the parties could even frustrate the appointment of the new European Commission president to replace Jean-Claude Juncker, stop the new EU budget being approved and ultimately “destroy the EU from within”.

Billionaire financier George Soros warned as much in an opinion piece for The Guardian, arguing Europe is “sleepwalking into oblivion and its people need to wake up before it is too late”.

Business Insider notes that “Soros has offered similar warnings before”. In May 2018 he said the EU was in the midst of an “existential crisis” and may cease to exist, and put some of the blame on US President Donald Trump.

But the growth of anti-EU forces in some of the bloc’s biggest countries, such as Germany, the UK and Italy, in advance of May’s European elections make the threat more urgent, he said.

Citing the European Parliament elections as “the next inflection point” where “anti-EU forces will enjoy a strategic advantage”, the philanthropist warned that unless the pro-European majority was awakened “the European Union will go the way of the Soviet Union in 1991”.

Meanwhile, market strategist Russell Napier says “the expected success of the far-right and far-left in the European parliamentary election in May this year augurs the beginning of the end for the currency union”.

He told the Financial Times: “Both extremes share a commitment to the return of sovereignty to their parliaments that is incompatible with a single currency.”

Many believe the collapse of the already-fragile eurozone will precipitate a full-blown political crisis on the continent.

“A scan of the horizon suggests it is all too possible to identify the triggers for what could quickly become a eurozone and wider EU collapse,” wrote Ian Kearns on CapX last year.

A continued failure to put the single currency on a sure footing has been exacerbated by the inability of Europhile leaders such as French President Emmanuel Macron to push for a close fiscal and banking union among member states.

The pursuit of greater political, economic and even military integration has further stoked anti-EU sentiment.

The Daily Express says “in addition to Brexit negotiations, the European Union has been juggling with increased pressure from Hungary, Poland and Italy to stop interfering with national policies”.

Britain’s chaotic exit has temporarily succeeded in uniting the other 27 EU member states but much will depend on what deal is agreed once the UK leaves and whether Britain’s post-Brexit success (or failure) encourages other nations to push to exit the bloc.

Cryptocurrencies news site CCN says “whether the UK exits the EU with a comprehensive Brexit deal or not, in an event in which the euro loses most of its momentum and the eurozone economy declines substantially in the next few years, the UK market could appeal to investors as a potentially safe haven”.

Another concern for Brussels is the potential economic and political fallout of another peak in the migrant crisis. Eurosceptic parties have seen their support surge across the bloc since 2015, when Europe saw the biggest influx of migrants and refugees since the Second World War. It led to anti-immigration policies and a hardening of rhetoric against outsiders among right-wing political groups.

Soros said the EU had made a “fatal mistake” by strictly enforcing the Dublin Agreement, which stipulates migrants arriving on European shores have to claim asylum in the first country of entry. This left Italy struggling to cope with the influx and drove the electorate “into the arms of the anti-European League party and Five Star Movement in 2018”, says Soros.

“Across much of Europe, such movements could be given a further massive boost, and the concept of free movement dealt a fatal blow, if the volatile President Erdogan of Turkey decides at any point to turn the flow of migrants and refugees into the European Union back on,” says Kearns.

Finally, there is the ever-present desire for eurozone enlargement from the EU’s youngest members. Dr Theodore Karasik in Euronews points to Croatia as an example where “adoption of the euro would be an unmitigated disaster”.

He says: “The problem is that this could jeopardize not just the stability of the eurozone, but quite possibly the very future of the EU itself.”