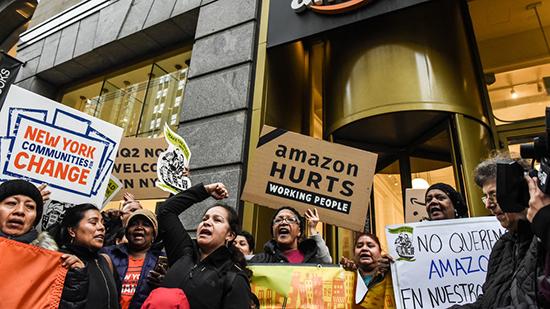 Megacorporation Amazon has shelved plans to build its second headquarters in New York City. The project had been met with generous tax breaks from the city authorities, and intense backlash from local residents.

“After much thought and deliberation, we’ve decided not to move forward with our plans to build a headquarters for Amazon in Long Island City, Queens,” Amazon spokeswoman Jodi Seth said in a statement on Thursday.

The project was announced in 2017, with Amazon kickstarting a bidding war between cities looking to attract the retail giant. New York was declared the winner last November, after a charm offensive by Mayor Bill DeBlasio and Governor Andrew Cuomo, who said he would “change my name to Amazon Cuomo if that’s what it takes.”

The company, which already pays a grand total of zero dollars in federal income taxes, would have been able to avail of $1.5 billion in tax breaks, as well as additional grants of $3,000 per employee for locating in the city’s outer boroughs.

Not everyone was as thrilled as ‘Amazon Cuomo’ and co. Residents and activists worried that the company would gentrify the working-class neighborhood, while the influx of 25,000 well-paid workers would drive up rents in the area. The proposed site is a former industrial zone adjacent to the country’s largest public housing project and was reportedly earmarked for additional housing units before Amazon was given the land.

“While polls show that 70% of New Yorkers support our plans and investment, a number of state and local politicians have made it clear that they oppose our presence and will not work with us,” the company’s statement continued.

Chief among these politicians were Bronx Congresswoman Alexandria Ocasio-Cortez, a self-described democratic socialist. Ocasio-Cortez said that she had been contacted by residents who thought Cuomo and DeBlasio’s priorities were out of line.

“Amazon is a billion-dollar company,” she said. “The idea that it will receive hundreds of millions of dollars in tax breaks at a time when our subway is crumbling and our communities need MORE investment, not less, is extremely concerning to residents here.”

“Offering massive corporate welfare from scarce public resources to one of the wealthiest corporations in the world at a time of great need in our state is just wrong,” read a joint statement from the pair. “We were not elected to serve as Amazon drones.”

Days before the deal was shelved, Gianaris collected signatures from residents opposed to the headquarters plan. Gianaris, who referred to the company as “scamazon,” sits on the state’s Public Authorities Control Board, a panel set to review the plan in 2020. Only one of the board’s three members would be required to vote ‘no’ to veto Amazon’s project.

Van Bramer, meanwhile, has railed against the company for its anti-union stance, appearing at rallies with unionized workers and grilling the company’s executives in council hearings. “We should be encouraging workers’ efforts to unionize, protecting small businesses, and investing in our local community, not trillion-dollar corporations owned by the richest man on Earth,” he wrote in the Gotham Gazette.

Amazon said it will not open the headquarters elsewhere, but will press ahead with two other planned offices in Nashville, Tennessee, and Arlington, Virginia.

“I hope this is the start of a conversation about vulture capitalism and where our tax dollars are best spent,” wrote New York City Council Speaker Corey Johnson. “I know I’d choose mass transit over helipads any day.”