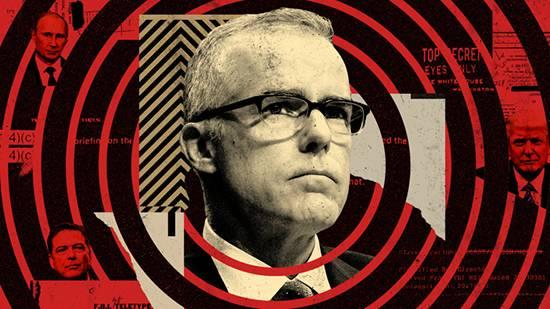 The president steps over bright ethical and moral lines wherever he encounters them. Everyone in America saw it when he fired my boss. But I saw it firsthand time and time again.

Editor’s Note: Andrew McCabe, the former deputy director of the FBI, was named acting director of the bureau after President Donald Trump fired his boss, Director James Comey, on May 9, 2017. McCabe would himself be fired less than a year later. In an exclusive adaptation from his book, The Threat, to be published next week by St. Martin’s Press, McCabe describes his encounters with President Trump and the steps taken to protect the FBI’s investigation into Russian efforts to influence the 2016 elections—and into the Trump campaign’s possible collusion with Russian actors.

On Wednesday, May 10, 2017, my first full day on the job as acting director of the FBI, I sat down with senior staff involved in the Russia case—the investigation into alleged ties between the Trump campaign and the Russian government. As the meeting began, my secretary relayed a message that the White House was calling. The president himself was on the line. I had spoken with him the night before, in the Oval Office, when he told me he had fired James Comey.

A call like this was highly unusual. Presidents do not, typically, call FBI directors. There should be no direct contact between the president and the director, except for national-security purposes. The reason is simple. Investigations and prosecutions need to be pursued without a hint of suspicion that someone who wields power has put a thumb on the scale.

The Russia team was in my office. I took the call on an unclassified line. That was another strange thing—the president was calling on a phone that was not secure. The voice on the other end said, It’s Don Trump calling. I said, Hello, Mr. President, how are you? Apart from my surprise that he was calling at all, I was surprised that he referred to himself as “Don.”

The president said, I’m good. You know—boy, it’s incredible, it’s such a great thing, people are really happy about the fact that the director’s gone, and it’s just remarkable what people are saying. Have you seen that? Are you seeing that, too?

He went on: I received hundreds of messages from FBI people—how happy they are that I fired him. There are people saying things on the media, have you seen that? What’s it like there in the building?