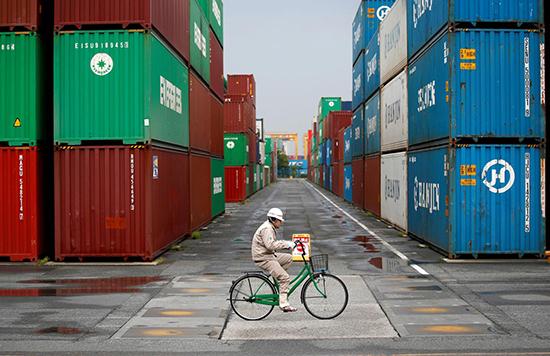 TOKYO (Reuters) – Japan’s exports in January are forecast to have fallen at the fastest pace in more than two years as the U.S.-Sino trade war put the brakes on demand for Japanese electronics, car parts, and heavy equipment.

Core machinery orders, a volatile data series seen as a leading indicator of capital expenditure, are expected to have fallen in December for the first time in three months, suggesting business investment could weaken.

Separate data are expected to show core consumer prices edged higher in January from the same period a year earlier but remained well off the pace needed to get near the Bank of Japan’s 2 percent inflation target.

On the whole, the data could paint a picture of an export-oriented economy that is shifting down to a lower pace of growth as uncertainty about trade frictions hits global demand.

“There’s a high chance capex plans will remain firm for the remainder of fiscal 2018, but other indicators related to capex… have not looked so bright.”

The United States and China have imposed tariffs on each others’ goods in a trade dispute that is a danger to Japan, because its exporters focus on shipping parts and heavy machinery to manufacturers in China. China’s economy is also slowing under pressure from cooling domestic demand.

Japan’s policymakers hoped export growth would drive corporate profits, which would then lead to higher business investment and higher wages, but this scenario is looking less likely to happen this year.

Exports in January fell 5.5 percent from the same period a year ago, according to the median of a Reuters poll of 15 economists. That would mark the fastest decline since exports fell 10.3 percent in October 2016.

Japan’s imports fell 2.8 percent in January, according to the poll, which would mark a reversal from a 1.9 percent annual expansion in December.

The trade deficit is expected to widen to 1.01 trillion yen ($9.16 billion) from 55.3 billion yen in the previous month, the poll showed.

Core machinery orders, which exclude those for ships and from electricity utilities, are forecast to have fallen 1.1 percent from the previous month, the first decline since a record 18.3 percent tumble in September.

That would be a slight acceleration over a 0.7 percent annual increase in December but is still lacking momentum to meet the central bank’s price target.