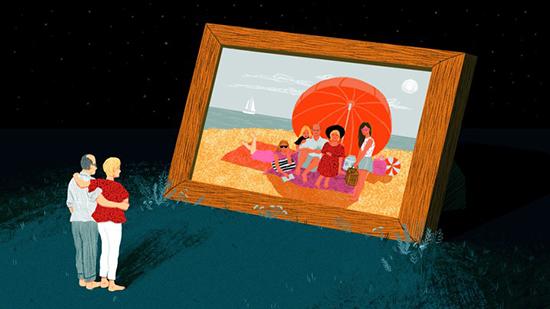 The choice was unusual, but loving: We wanted them to live without the shadow of their mother’s mortality hanging over them.

We decided not to tell the kids. Marla knew that once our three daughters understood that their mother had been given 1,000 days to live, they’d start counting.

They would not be able to enjoy school, friends, their teams, or birthday parties. They’d be watching too closely—how she looked, moved, acted, ate, or didn’t. Marla wanted her daughters to stay children: unburdened, confident that tomorrow would look like yesterday.

Marla was my first and only girlfriend. We were introduced in October 1987, when we joined a coed intramural flag-football team in Ann Arbor, Michigan. I wasn’t very good with women, monosyllabic in their presence. We all went to a bar after one game, and I came home with a napkin on which I’d jotted down words to describe Marla: “Hot. Fast. Fun. Sweet. Flint.” Yes, flint as in Flint, Michigan—her hometown—but also flint as in flinty—steely, speedy, mighty, glinting.

A month later, I mustered the nerve to call her house phone (we only had landlines in 1987). We would spend the next 31 years together.

Marla could water-ski barefoot. I was a rabbi’s kid; I rarely even went on boats. She made a habit of taking me places.

If you had asked me on our wedding day, I would have told you with confidence what our love would look like: We’d be a couple who jogged together in Scarsdale, danced in Nantucket together, carved through snow or lakes on skis together, spun the Hanukkah dreidel together with our children, and sang along together to Bruce Springsteen (her prescient favorite was “Tougher Than the Rest”). I would not have said we’d be a couple who fought a fatal illness together. Nor that this private act would be the thing that united us the most.

In 2009, Marla’s radiologist called to tell her that she had early-stage breast cancer. She was also BRCA-positive, meaning that she carried the inherited gene for the disease—a troublesome marker. After a double mastectomy and ovary removal, she needed eight rounds of chemotherapy to clear the cancer found in her lymph nodes.

Our kids were 8, 9, and 11 at the time, and though they understood then that she was undergoing treatment (wigs were hard to hide), we never told them the news we soon learned from Memorial Sloan Kettering’s head of breast-cancer oncology: Marla had a triple-negative cancer cell, the fiercest of them all. When linked with the BRCA mutation, it is commonly referred to as “the breast-cancer death sentence.” This specialist bluntly told her: “Go live your next 1,000 days in the best way you know how.”

I always joked with Marla, once she had been diagnosed: “I’m not sure what you’re afraid of more, cancer itself or the thought of my being responsible for the kids as a single parent.” I’m pretty sure it was the latter. I still believe that was a determinant in her longevity.

When Marla beat back the first assault in 2009, we all celebrated. When the cancer returned two years later, we told only our parents and siblings. Aside from them, we were alone with her illness and its lethality. Marla and I launched our stealth treatment strategy together: Everything would be tried; little would be shared. We saw no need to alarm friends, worry relatives, or derail the girls. Subterfuge was essential for survival—not just the literal, existential kind, but survival of the spirit. Our kids would not be robbed of stability; protecting their sense of the ordinary was everything. The ground would stay steady, and we would extend the runway for as long as possible.

Some might not have made the same decision, believing that the girls had a right to know they should savor diminishing moments. But Marla didn’t want her girls to savor; she wanted them to sail, and that meant less information—not a lie, but a lacuna. Marla refused to let family time together feel too precious, too heightened, too sad.

How does one fight cancer on the sly? When Marla needed Neulasta shots for her bone strength, she slipped the doctor into our house quietly in the evenings, while the kids were upstairs doing their homework.

Despite the fatigue and nausea of chemo, she continued to run long distances, for her own mental fitness, and more important, so her kids would see her strong. I knew these miles were a miracle.

Bimonthly Amtrak trips to Boston for treatment were disguised to our daughters as volunteer efforts to participate in cancer trials, but the truth was that she was the trial. Marla was lucky enough to enroll in medical Hail Marys at Dana-Farber Cancer Institute that kept her alive.

When tumors in Marla’s neck made her hoarse, she told friends she had laryngitis. When those tumors started to protrude, she wore scarves in warm weather. The girls were confused as to why they were suddenly “gifted” Marla’s favorite running tank tops, but she could no longer wear them—they exposed the port that had been inserted near her bra line, an essential catheter due to hardened arm veins from years of infusions and blood draws.

We threw everything at her disease: lectures, research, involvement in cancer organizations, yoga, meditation, teas, soups. She even went to a storefront healer who lit incense, read her palm, and led her in prayer. He declared her a “badass” because of her restorative powers. It was a nickname that I promoted with all her doctors and nurses because it was not only hopeful, but true.

She didn’t just buy time; she cheated it, squeezed months and years out of it. Marla was a statistical freak, an aberration, an outlier. One thousand days landed firmly in our rearview mirror.

Finding quiet time for the two of us in a house with three active young girls was challenging. We caught up with each other during walks, in the shower, or on a rare date night out.

The treatments organized our lives and demanded our optimism. I tried to be Marla’s cheerleader and coach to reenergize her for the next checkup, infusion, injection, or worse. Her smile, her lack of Why me?, took my breath away. Our affection became a kind of anesthetic.

Every six weeks, when she got scanned, Marla and I braced ourselves for results. This past fall, we had to confront that we were running out of options.

At Thanksgiving, Marla and I gathered the kids at the kitchen table and told them the story we’d spared them. She had effectively been undergoing chemo for seven straight years. She had chosen to give our family a routine without a morbid spotlight. She did not want endless questions, pity, or gossip.

An unanticipated complication developed shortly after, resulting in Marla’s death on December 19.

Our girls have talked often about their mother’s sacrifice and said to me without prompting, “I am so glad I didn’t know what Mommy was going through. I would have worried every single day.” In these past two months, they have reassured me again and again that not telling them was the loving choice.

Marla insisted on giving our daughters their youth, convinced that normalcy would allow them to discover their own strengths. And she gave me something just as extraordinary: the resilience of romance in the face of a sure, premature ending.

When Marla went into hospice, Sara—one of Marla’s favorite doctors at Dana-Farber—called to check in. After nearly 10 years of a shared relentless combat, Marla hit her with the final zinger, “How do I die?”

I admired the question, but knew Marla already had a game plan. She’d been practicing her goodbyes for a decade. Our girls, now nearly 18, 19, and 21‚ sat on her hospital bed, one at a time, listening to their mother’s final words. Marla kept her eyes closed, as though reading from a teleprompter on the inside of her lids. She was unfiltered, loving, grateful, and her usual tart self. She left nothing unsaid.

Marla earned and survived a little more than 3,500 days instead of 1,000 since her initial diagnosis. In her lifetime, she celebrated 25 anniversaries (about half the norm for a happily married couple), 57 children’s birthdays (parents average about 45 per child), three bat mitzvahs, three college acceptances, and two high-school graduations.

The next numbers make me numb:

Marla said to me at the hospital, “No glory days for us. We almost had the kids out of the house, and now you’re alone. I’m so sorry.”

I replied, “Sorry about what? You made life worth living. When you kissed me, I melted. I admired your pureness, your power. You outran science. Thank you for taking me on your magic carpet. Rest easy, my one and only girlfriend.”