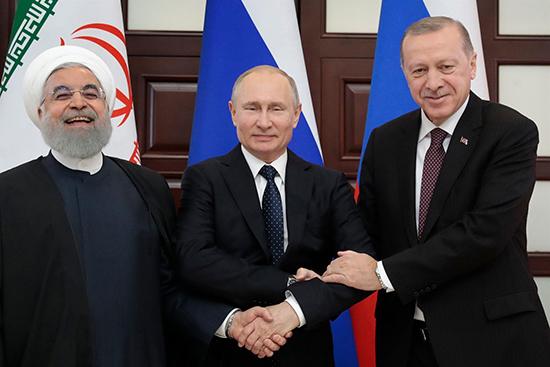 Syria’s territorial integrity will not be preserved if the country’s east and Manbij city are not cleared of the YPG, Turkey’s President Recep Tayyip Erdoğan has said at a three-way summit with the Russian and Iranian presidents in the Black Sea coastal city of Sochi, expressing high hopes for a resolution to the eight-year-long war.

“Hopes to find a solution had never blossomed this much,” Erdoğan said during a joint press conference with Russian President Vladimir Putin and their Iranian counterpart Hassan Rouhani on Feb. 14.

Iran, Turkey, Russia will continue efforts to reduce clashes and achieve stability in Syria, the three leaders said, adding that they “agreed to form a committee on a new Syrianconstitution as soon as possible.”

Erdoğan stressed that Turkey continues to do its part on the Idlib deal while calling for the Syrian regime to obey the cease-fire. He also said that Turkey will host a new trilateral summit on Syria in coming months.

“The territorial integrity of Syria will not be able to be provided if the YPG is not cleared from the east of the Euphrates River as well as Manbij and if they are not given back to their real owners,” Erdoğan said earlier in a statement ahead of his bilateral meeting with Putin.

The summit that brought Erdoğan, Putin and Iranian President Hassan Rouhani together for the fourth time under the Astana Process took place in Sochi. Before the three-way summit, the leaders held bilateral talks.

Erdoğan said the top issue the leaders would discuss was the United States’ decision to pull out troops from Syria, although no details of the withdrawal have been made clear. “It’s very important that we continue to work together in this new era,” Erdoğan stated, describing the U.S. withdrawal as one of the most important challenges ahead.

It’s also very important that all three countries pursue a joint policy to wipe out all militants from Syrian territories, including those of the YPG and ISIL, Erdoğan stressed.

He also stressed that a U.S. proposal to set up a security zone in northeastern Syria would be considered by Turkey only if it’s to assure the safety of its borders and citizens, the president said. “We are continuing to discuss the details with the U.S. We welcome the positive stance of Russia toward this proposal. We wish to move in coordination to this end,” he added.

Putin: Idlib deal should be implemented

Erdoğan also mentioned a Turkey–Russia protocol on the establishment of a demilitarized zone in Idlib province of Syria, which is currently run by jihadist groups, mainly Hayat Tahrir al-Sham (HTS), a former al-Nusra affiliate. “Our expectation from Russia is the continuation of the implementation of the Idlib protocol,” Erdoğan stressed, adding that Turkey’s efforts to prevent militants from attacking a Russian military base in Hmeymim will continue.

Turkey’s unmanned aerial vehicles have not spotted heavy weaponry belonging to the jihadists in the demilitarized zone, the Turkish president stressed, expressing his hope that an approval would be provided for Turkish drones to fly over Afrin and the region between Azaz and Jarablus.

Erdoğan, in his remarks at the opening of the summit, underlined the success of the Astana Process by singling it out as the most efficient international setting to deliver peace and stability to Syria. “We will continue to take steps to accelerate the political transition period in Syria,” he added. “Syrian refugees are counting down the days to return home. I am sure we will give them some good news.”

Putin, for his side, stressed the need for a final solution to the Idlib problem, suggesting that an ongoing ceasefire should not pave the way for militants to continue their presence in the enclave. “We, as Russia, Turkey and Iran, should act together to this end,” he said.

The three leaders are set to discuss ways to protect Syria’s territorial integrity as the U.S. has already declared its withdrawal from Syria, Putin recalled. He also called on the international community to deliver humanitarian aid to the Syrian people without any pre-condition.

Echoing Putin, Rouhani also said al-Nusra still controlled 90 percent of Idlib province in the face of a deal between Turkey and Russia that aimed to avoid a humanitarian crisis in the enclave. “It seems that this agreement will lead to a permanent problem in the region,” he said.

The Iranian president underlined the need for the protection of the rights of all Syrians, including Syrian Kurds “who have been living in northern Syria for centuries.” But Rouhani also raised Turkey’s security concerns and stressed that they understand Ankara. “We believe the best way to address Turkey’s security concerns would be through dialogue with the legitimate government of Syria. As you know there is the Adana Protocol between Turkey and Syria,” he said, repeating a proposal made by Putin last month.