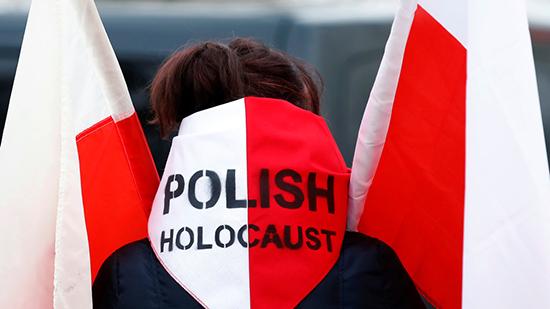 Israeli Prime Minister Benjamin Netanyahu has sparked a fresh diplomatic row with Poland after he defied the controversial Holocaust law, which criminalizes blaming the Polish state for the extermination of Jews.

Adding fuel to the fire, Netanyahu made the inciting comment on Polish soil, in the capital Warsaw, while speaking on the sidelines of the conference on the Middle East on Thursday.

Journalists asked whether he was going along with Poland’s attempts to whitewash history in regards to the Holocaust.

“Here I am saying Poles cooperated with the Nazis. I know the history and I don’t whitewash it. I bring it up,” the Israeli PM replied.

“The Poles collaborated with the Nazis and I don’t know anyone who was ever sued for such a statement,” Netanyahu added, as reported by Haaretz.

The legislation put two of the closest US allies – one in Europe and the other in the Middle East – at odds when it was passed by the Polish parliament and signed into law by President Andrzej Duda, who subsequently referred it to the Constitutional Tribunal. The law bans phrases “Polish death camps,” “Polish SS” and the like, making it illegal to imply that Poles or the Polish state were complicit in the mass murder of Jews during WWII.

The law initially envisaged jail sentences of up to three years, but was later watered down to make blaming Poland for the Holocaust a civil offense, punishable by a fine. The amendment signed by Duda in June soothed the bitter dispute, eliciting praise from Netanyahu, who welcomed the tone-down.

“We have always agreed that the term ‘Polish concentration/death camps’ is blatantly erroneous and diminishes the responsibility of Germans for establishing those camps,” Netanyahu and Duda said in a joint statement after the amendment was enacted.

In an interview in December, Duda sounded quite apologetic when he said that it was “wrong” that the initial bill was adopted by the Polish parliament on the eve of Holocaust Remembrance Day.

Duda also criticized the statement by Polish PM Mateusz Morawiecki, who inflamed tensions between the countries by saying last February that there were also “Jewish perpetrators” of Holocaust. The remarkdrew the wrath of Jewish communities in Poland, Israel and around the globe.

However, the reconciliatory rhetoric might become a thing of the past in the wake of Netanyahu’s surprise swipe at the law. Israeli media reported that Morawiecki has been “seriously considering” canceling his upcoming visit to Israel, where he is scheduled to participate in a meeting of the Visegrad group hosted by Tel Aviv for the first time next week.

In a series of Twitter posts on Friday, Morawiecki noted that the Polish nation paid “an unimaginable price” and “never collaborated with Germany’s Nazis” with mentioning Netanyahu’s new taunt.

The Polish PM pointed out that six million Poles were killed in the WWII, including three million Polish Jews and Poles with Jewish backgrounds.

“We stood on the side of good against the absolute evil,” he tweeted.

Haaretz reported that the Polish government has been looking into the remark.