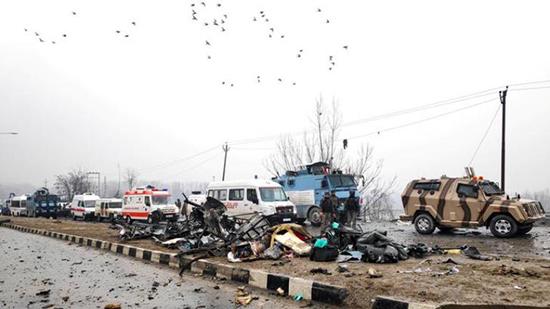 Home Minister Rajnath Singh said the government is determined to foil the designs of those who want to disrupt peace through such a terror attack sponsored and sheltered by Pakistan.

At least 37 jawans were killed and several others wounded when an explosive-laden SUV rammed into a Central Reserve Police Force (CRPF) bus at Awantipora town in J&K’s Pulwama district on Thursday evening.

The deadliest attack in three decades of Kashmir’s insurgency was claimed by Pakistan-backed terror outfit Jaish-e-Mohammad, escalating tension with the neighbour as several central ministers vowed a befitting reply.

The CRPF bus was part of a 70-vehicle convoy passing through the Gundipoora section of the Srinagar-Jammu Highway when it was attacked.

Each vehicle was carrying 35-40 CRPF jawans. The convoy had started from Jammu around 3.30 am and was supposed to reach Srinagar before sunset, officials said.

Jaish identified the suicide bomber as Adil Ahmad Dar and even released a video of him brandishing rifles. Dar is from Pulwama’s Kakapora and had joined the terror group in 2018.

Body parts could be seen strewn around the area. The bodies are dismembered and mutilated making it difficult for doctors to give the exact number of casualties, a senior security establishment official said.

The powerful explosion, which reduced the bus to a mangled heap of iron, was heard many kilometres away, including in some parts of Srinagar adjoining Pulwama district.

Some shots were also fired at the convoy, CRPF DG R R Bhatnagar said. The Cabinet Committee on Security will meet Friday morning to discuss the security situation in Jammu and Kashmir against the backdrop of the attack, sources said.

A 12-member National Investigation Agency (NIA) team headed by an IG-rank officer is leaving for Kashmir on Friday morning to assist the J&K Police in forensic evaluation of the crime scene.

Top security sources said there were inputs that Jaish terrorists were collecting large quantities of explosives but their exact intent was not known.

There was an Intel alert on February 8 that terrorists may carry out IEDs to target security forces.

Singh said the government is determined to foil the designs of those who want to disrupt peace through such a terror attack sponsored and sheltered by Pakistan.

Jaish-e-Mohammed has carried out this terror attack. We assure the country that we will undertake whatever it takes to avenge this, he said.

Union home secretary Rajiv Gauba, who reached Thimpu, Bhutan, earlier on Thursday for the annual secretary-level talks, has decided to cut short his visit and rush back.

Prime Minister Narendra Modi said the attack was “despicable” and “dastardly”. “The sacrifices of our brave security personnel shall not go in vain. The entire nation stands shoulder to shoulder with the families of the brave martyrs. May the injured recover quickly,” PM Modi said in a tweet.

Union minister Arun Jaitley called the attack an example of “cowardice” and said, “Terrorists will be given an unforgettable lesson for their heinous act.”

Union minister Kiren Rijiju said the “cowardly” terror attack will not go unpunished and it will be avenged in “all ways possible”.

US Envoy to India Kenneth Juster also condemned the attack. “US Mission in India strongly condemns today’s terrorist attack in J&K. We send our heartfelt condolences to the families of the victims. The United States stands alongside India in confronting terror and defeating it,” Juster said.