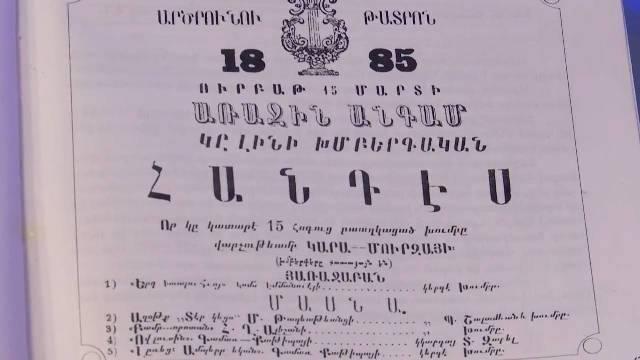 By  The Armenian Mirror-Spectator

Special to the Mirror-Spectator

The recent initiative of Armenia’s Parliament’s deputy-chair Alen Manukyan aiming to change Mer Hayrenik (Our Motherland), the national anthem of Armenia, brought back the long-standing historical debate about the origins of Armenia’s number-one national song. Although the history of the lyrics is known, the music remains a matter of discussion. This is an attempt to analyze the known facts on the origins of Mer Hayrenik with some additional research.

It is on record that Mer Hayrenik was played in Zeytoun (1895), in Van (1915), and during other famous self-defense battles when local Armenian music bands sang it in order to encourage the defenders resisting the Ottoman army’s attacks. According to the Armenian Revolutionary Federation politician Arsho Shahkhatuni, Mer Hayrenik was played in Yerevan while the historic battle in Sardarapat was going on in May of 1918.

Thus, when shortly after the victorious battle Armenia became independent, Mer Hayrenik naturally was transformed into the state anthem of the republic. Simon Vratsian, the last prime minister of the independent Armenian republic, conveys in his memoirs the story of how the flag and the coat of arms have been adopted but makes no mentioning of the anthem. To the best of my knowledge, no memoirs relevant to those historic days detail the story of the adoption of the state anthem. It appears to have happened naturally: Mer Hayrenik was already widely perceived as an anthem even before independence, due to its significant historical background.

The emergence of Mer Hayrenik

In the middle of the 19th century, when Italian general Giuseppe Garibaldi was fighting for Italy’s liberation from the Austrian Empire, Armenian poet Mikayel Nalbandian, known for his sympathy for liberty and equality of people, wrote a poem called “The Song of the Italian Girl.” He visited Italy in 1859 and later finished the poem in Germany. It was published in 1861 in Hyusisapayl [Northern Lights] magazine of the Lazarian Armenian College of Moscow.

The poem supported Italy’s independence and encouraging the Armenians to follow the same pattern of national liberation. This call and the parallels in liberation movement might have drawn the attention of Armenian musicians and intelligentsia of that period. A melody was adjusted to some of the couplets, minor textual modifications were made for making the content more Armenian and Mer Hayrenik emerged as a new Armenian track. Coincidentally, both the Italian and Armenian flags are comprised of three colored stripes: horizontal in the Armenian case, and vertical in Italy’s. Because of this match, Nalbandian’s poetic reference to a tricolor flag (in the original: “nayir neran yerek gouynov, nviragan mi neshan”) remained unchained.

The first ever known musical performance of Mer Hayrenik goes back to March 15, 1885 at the Ardzruni theater of Tiflis, (modern day Tbilisi, Georgia) where Armenian musician Khachadur (Kristapor) Kara-Murza, originally from Crimea, organized the first ever Armenian concert for multi-voice chorus. The flyer of this historic concert shows that “The Song of the Italian Girl” was played at the very opening part.

The melody of Mer Hayrenik is often attributed to renowned composer Barsegh Kanachian, one of the students of Gomidas vartabed; however, chronologically this statement cannot be correct. Kanachian himself was born in 1885, the same year that the concert in Ardzruni’s theater took place.  Even though Kanachian could not be the one to compose it, as many researchers indicate, certainly he worked on improving the music during the days of the first Armenian republic.

Some researchers claim that the music might had been composed by Kara-Murza himself; others disagree on the basis that his archives contain no mentioning of composing the track of Mer Hayrenik. Soviet Armenian researcher Mkrtich Muratyan in a monograph dedicated to the life of Kara-Murza published in Yerevan in 1950, mentions that the musician composed music for another poem by Mikayel Nalbandian called “Liberty.” Muratyan, however, mentions that Kara-Murza only arranged the music for Mer Hayrenik, but did not compose it. New York based researcher and musician Krikor Pidedjian, who also authored a biography of the renowned musician, indicated, Kara-Murza had never titled himself as the author of Mer Mayrenik in any music booklet or concert program – although he did put his name next to other melodies that he composed.

The ballet “Raymonda” by Russian composer Aleksander Glazunov (1865 – 1936) has a segment the melody of which is identical to that of Mer Hayrenik. However, the theory that Kara-Murza could have benefited from Glazunov’s music is rejected again by the chronology of events: “Raymonda” was composed in 1896-1897 and presented for the first time in Russia in 1898, more than a decade after Mer Hayrenik had already been performed in Tiflis. More logically, it was Glazunov who adapted the already existing song to his ballet. We may suggest the following versions on how technically this could have happened.

Mkrtich Muratyan writes that Kara-Murza visited St. Petersburg in 1897, the same year Glazunov was working on “Raymonda.” The following year Kara-Murza arranged several concerts of Armenian music in Moscow. One can only guess whether Glazunov met him in person in St. Petersburg or Glazunov might have received a copy of Kara-Murza’s notes that had already been published in Tiflis in some other way.

Glazunov was known for his brilliant musical memory. He might had also been present at any of Kara-Murza’s concerts or heard the track at an Armenian function in Russia and later used it in “Raymonda.” It is known that Glazunov and Aleksander Spendiaryan, another Armenian composer originally from Crimea, were friends.

Once at an antique store in a Boston suburb, this author got a vinyl disk of Glazunov’s and Ippolitov-Ivanov’s music (we will refer to Ippolitov-Ivanov later) jointly released by Soviet Melodia and American Angel companies in 1970, for the unbelievable price, in 2011, of one dollar. This old-fashioned bit of merchandise contains interesting information printed about the subject we explore. “Although Glazunov drew on a large number of different sources, Russian orientalism, Greek modes, Finnish melodies… he always maintains the unity of style,” the writing on the back of the record cover tells us. The authors of that narrative, possibly could have added “Armenian arrangements” to the list too, although “Russian orientalism” is a subtle hint in that direction. Let’s keep in mind that in this historical period the Caucasus was part of the Russian Empire.

An interesting feature is related to the other Russian composer of that same disk, Ippolitov-Ivanov. Mikhail Ippolitov-Ivanov spent two years in Tiflis in 1892-1893 as a supervisor of the Caucasian chapter of Russia’s Musical Society. Armenian composers Romanos Melikian and Garo Zakarian attended Ippolitov-Ivanov’s musical classes.

The composer was very familiar with Armenian music. He brought together various Armenian tracks in a beautiful musical composition called “Armenian Rhapsody.” Ippolitov-Ivanov used some Armenian tracks in his other musical works as well. The “Caucasian Sketches” of the composer, which is also recorded on the aforementioned vinyl disk, consists of four movements.  Regarding the forth one, called “Procession of the Sardar,” the narrative on the disk cover provides the following details: “Ippolitov-Ivanov used an eight-bar theme of a Zeitoun march,” which “has the characteristics of Zeitoun song.”

Although it lacks any further clarification about Zeitoun and the march itself, at least for the Armenian audience this is a quite well known story. The source was referring to “Arevn yelav Zeitountsiner” [The sun rose, people of Zeitoun]: the march of Armenian famous composer Dikran Tchoukhajian composed in 1868, soon after the Armenians of the Zeitoun region successfully pushed back an Ottoman offensive. The multimedia segment hyperlinked here puts next to each other both tracks: of Tchoukhajian and that of Ippolitov-Ivanov. As we can see, the composer merely adjusted the Armenian melody to his movement.

It is logical to assume that Mer Hayrenik, which Kara-Murza performed in Tiflis and Baku dozens of times, while the Russian composer was working in the Caucasus, also should have been among the arrangements that Ippolitov-Ivanov took with him back to Russia. However, he did not use it in “Rhapsody” or any other composition.

Ippolitov-Ivanov could have passed some of his unused notes to his friend and counterpart Glazunov. The two composers knew each other very well. According to a Russian source, Ippolitov-Ivanov referred to Glazunov as “petite Sasha” (Sasha is diminutive for Aleksander in Russian) as the latter was six years younger to him. The director of Russia’s Imperial Theaters Ivan Vsevolozhskiy wanted “Raymonda” to be finished by late 1897, which left the composer less than two years to write the ballet. During the same year of 1896 he was also working on a second symphony and other musical works – so he obviously must have felt pressure to meet the deadline for “Raymonda.”

Gazunov’s counterpart and friend might have wanted to support him by providing him some Armenian or other musical materials. “Raymonda,” released shortly thereafter in 1898, marked Glazunov’s return to a successful musical career.

In reality, it is not uncommon for classical composers to be influenced by folk songs. The second musical poem of Bohemian composer Bedrich Smetana’s set of poems called “My Motherland” sounds exactly like the anthem of Israel. The suggested explanation is as follows: an Italian (might be also Jewish-Italian) folk song was the original source for both melodies.

Italian music for an Italian poem?

Armenian composer Konstantin Petrossian, who currently works and resides in Rhode Island, suggests that the roots of the music must be tracked down in Europe. Krikor Pidedjian, independent of Petrossian, suggests a similar story. He recalls that his musical teacher Hampartsoum Berberian during a short stay in Italy in 1953 heard a very similar melody played in one of Italian’s cafes. An Armenian blogger’s Russian language writing suggests that Mer Hayrenik’s melody carries some Italian influence.

It would be logical to assume that the prominent Armenian Catholic schools that existed in Italy in the 19th century, the Murad Rafaelian college (closed in 1997) or the Mkhtitarist school (continues to function today) must have been aware of Mikayel Nalbandian’s famous poem on Italy’s struggle. In fact, the Mkhitarist school in various times had branches in the Caucasus and Crimea, so a certain interaction between them existed. Maybe, the answer to unresolved mystery about the authorship of Mer Hayrenik’s melody is related to the Armenian schools of Italy, where certain musicians could have worked on putting music to Nalbandian’s “Italian” poem.

It is a well-established fact that both schools were engaged in different musical activities: the Mourad Raphaelian even had its own school-march.