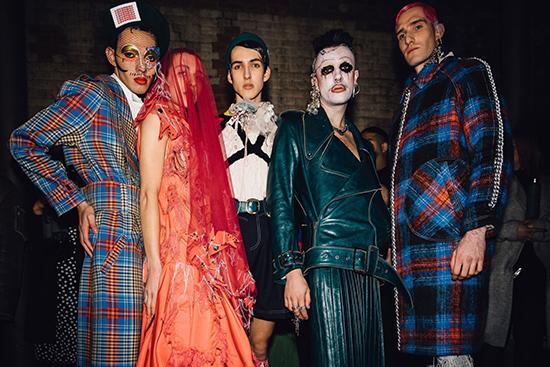 There’s no disguising it: Thanks to Brexit, things are in a surreal state of angst and political grotesquery here in the British Isles. Ask us about it! Every street vox-pop and public transport conversation attests to the same feelings of numbness and anger. And, then, because we’re British, and we’re so good at it: wild fits of embarrassment as we imagine what the rest of the world must think of us.

For the benefit of guests arriving for London Fashion Week, here’s a brief summary of the chaos. Brexit has internally split political parties into Leavers and Remainers, right up to the prime minister’s own cabinet. While the bawling politicians send Britain hurtling towards a no-deal crash-out from Europe at the end of March, the U.K. government is quietly hiring crisis-emergency personnel to handle the unplanned-for chaos. Its level of incompetence may be gauged by the fact that the Transport Department—cleverly planning ahead to ease disruption on either side of the British Channel—ordered a new ferry from a company that turned out not to own such a boat.

Brexiteer enthusiasm for Britain leaving Europe to “regain our sovereignty” is code for a basket of beliefs that will, at least, sound familiar to Americans in Trumpland and to the French in the time of the gilets jaunes. It boils down to anti-immigration sentiment, plus the notion that national employment prospects will somehow magically improve thereafter. However, the Little Englander paradox that so many appear to have overlooked is the dumb fact that we’re on an island. If all existing EU regulations are yanked overnight, then docks will back up, aviation protocols will discontinue, and so nobody and nothing, including food and medicine—and somewhat down the list, fashion—will be able to come in and out as before.

Where does this leave fashion, an industry that is worth £32 billion to the U.K. economy and which has flourished on the coming and going of goods and talent from the EU? Leaders have spoken up: Burberry has stated that crashing out with no deal will inevitably damage business. The British Fashion Council announced that it backs a second referendum, the so-called People’s Vote, although at the 11th hour time of writing, there’s no sign that Parliament will opt for that.

So, is London Fashion Week likely to be full of clothes designed for eating hoarded canned food by candlelight? Not in the slightest. If there’s an apocalypse coming, the recommendation for a survivalist kit from the British community (read: the multicultural talent pool that has come through U.K. colleges) is more likely to be a kind of defiantly high-tone glam than flak jackets and masks. Charles Jeffrey hit that mood brilliantly with his Weimar Republic club extravaganza of a performance at his Loverboy show in January. With Matty Bovan, Richard Quinn, and Michael Halpern all in that same Central Saint Martins MA dress-and-be-damned vanguard, there is certain to be more of that ilk to come.

In many ways, it’s a case of history repeating itself. When politics and the economy do their worst, London’s fashion designers have always rallied around self-reliant creativity and individualism. A decade ago, when banks were crashing, Christopher Kane, Mary Katrantzou, and Roksanda Ilincic surged up in all their colorfulness; in the early-’90s recession, Alexander McQueen and Hussein Chalayan exploded on the scene. And it was the seriously ground-down economy of the ’70s that triggered the two finest hours of British style: glam rock (David Bowie, Roxy Music) and punk.

The belief that drab and cautious clothes are the last thing anyone wants in dark times has worked to make London attractive on the world stage in the past. But then again, this is not the past—much as nationalistic Brexiteers would love to revert to their own (white) fantasy of it. The truth is that the prime strength of London fashion now is its diversity. Quite apart from all the designers of European origin who are British entrepreneurs, voices from British black and South Asian communities are now stepping up to lead a generational shift in creativity. Grace Wales Bonner, Supriya Lele, and A Sai Ta are some of the ones to watch on that front.

And if many of the new ones deliberately work on a small scale, with hand-crafted effects to the fore? In times gone by, that kind of practice was scorned by industry critics who judged designer potential only on ability to scale. We all know where the consequences of that led in the past decade—to the evils of overproduction, markdowns, and waste. In London, as among a whole cohort of global talent, a new, more ethical model of making incredible things to order is emerging, be it for celebrities, or for people who direct-message designers privately. That’s the way things are looking as of today: the counterintuitive fact being that the more extreme, the more extravagant, and the more fun something is, the more it’s likely to find a home in someone’s wardrobe. Onward!