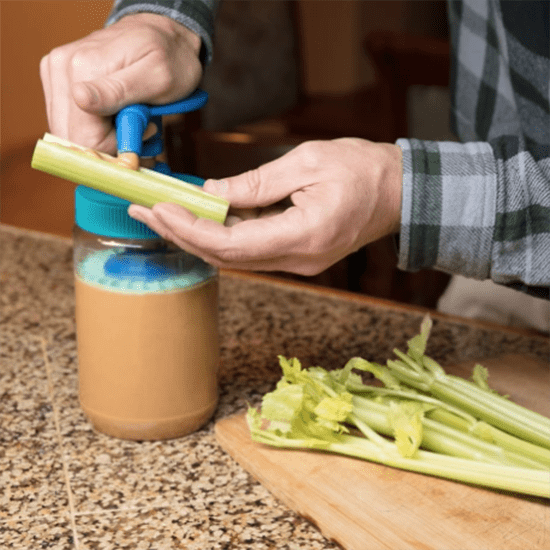 No knife, no problem.

Those who fall into the peanut butter-obsessed camp would likely agree — there are few things wrong with the snack. It’s filling, you can eat it on the go, it’s salty and sweet … you know all these things, I’m sure. But there is a design flaw when it comes to most peanut butter jars, which is that they leave you scraping around the jar to get those last few scoops. That said, a crowdfunded peanut butter pump could soon solve that problem.

Created by Andy Scherer, a dad to five grown children (no wonder he had the idea!), the peanut butter pump currently lives on Indiegogo. Andy invented the kitchen tool in 2017 and launched a crowdfunding campaign in February with hopes of beginning distribution this August.

The pump was designed to fit most 40-ounce peanut butter tubs. You screw it on in place of a lid and pump out your desired amount of PB (there are measurements tabs on the nozzle!). The pump scrapes the sides of the jar as you use it, so by the time the jar is empty, the insides are nice and clean, and you can toss the jar in the recycle bin without rinsing it out. Genius!

Use the pump to spread PB on bread, crackers, or fruits and veggies … really any carby/produce-y vehicle of your choice. There are two nozzles to help improve your PB-eating experience even more: the stream-style nozzle, meant for snacks and smoothies, and the ribbon nozzle, best for sandwiches. Andy really thought of it all!

Head to Indiegogo to find out more about the campaign and donate to the cause. As of this posting, they were almost halfway to their $20,000 goal with 29 days left.