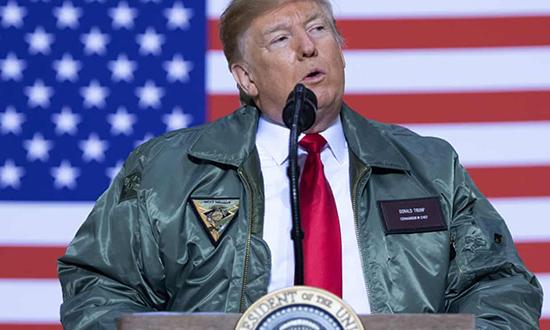 Russia  Today
US President Donald Trump has urged European nations to repatriate and prosecute jihadists from their countries who were captured in Syria. Otherwise, he warned, the US could release the terrorists to “permeate Europe.”

“The Caliphate is ready to fall,” Trump tweeted. “The alternative is not a good one in that we will be forced to release them…”

The United States is asking Britain, France, Germany and other European allies to take back over 800 ISIS fighters that we captured in Syria and put them on trial. The Caliphate is ready to fall. The alternative is not a good one in that we will be forced to release them……..

Trump tweeted that the US “does not want to watch” Islamic State (IS, formerly ISIS) “permeate Europe,” which he believes is likely to happen if withdrawing US forces let them go while “pulling back after 100% Caliphate victory.”

….The U.S. does not want to watch as these ISIS fighters permeate Europe, which is where they are expected to go. We do so much, and spend so much – Time for others to step up and do the job that they are so capable of doing. We are pulling back after 100% Caliphate victory!

The US-backed Syrian Democratic Forces (SDF) say they are close to the “final defeat” of IS, having reduced their territory to a small final stronghold. Trump recently announced that he would pull US troops out of Syria, but has not yet set any deadlines.

With that, American officials have reportedly warned European countries that they are running out of time to take back and put on trial jihadists who went from Europe to fight for IS. Some 800 of them have reportedly been captured by the US-backed forces.

According to UN figures, up to 42,000 foreign fighters traveled to Iraq and Syria to join IS, including around 900 from Germany and 850 from Britain.

In December, the Washington Post reported that authorities in SDF-controlled areas don’t want “responsibility” for guarding and feeding imprisoned militants, and they “lack the capacity” to stage trials for them. Local officials told reporters that 900 male fighters from 44 nations are kept in prisons that the US forces help to maintain.