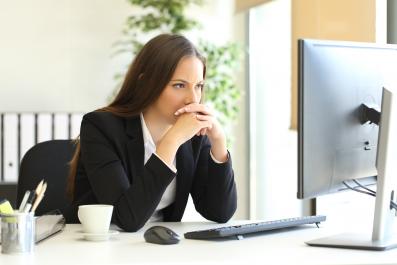 How people respond to criticism is what separates winners from losers.

This originally appeared on Quora. Answered by Dennis Zdonov.

We’ve all been there. You’re seated across from your boss, co-founder, or mentor. Your stomach tightens as they tell you what about your work needs improvement, and why.

Sometimes, it feels like you’re being attacked, or that they view you as inadequate.

For many of us, our first impulse is to tuck our tails between our legs, leave the room, and actively avoid these kinds of situations in the future.

Receiving negative feedback can be nerve-racking, no doubt, but the way people respond to critical situations is often what separates the winners from the losers.

For most of us, we tend to have two types of reactions to negative feedback:

But neither of these means of responding to negative feedback works to your advantage. In order to become the best version of yourself possible, you must be able to listen to criticism with a level head, and distill which bits of it are most important (and which are probably not). There’s no room for too much hard-headedness or too little backbone.

For startup founders, you just really need to find the sweet spot between the two extremes. You just have to do it.

Founders, especially, receive tons of advice — both critical and otherwise. If you’re unreceptive to it, you’ll cling too long to failed ideas and bad habits. If you’re too open to it, and try implementing every piece of criticism you receive, you’ll end up making changes that don’t make sense or aren’t actually valuable.

It’s an important and subtle skill — a kind of balancing act of awareness, honesty, and distillation — that all founders and people, in general, have to master.

1: Weigh criticism based on its “believability index.”

2: Learn to prioritize only what’s actionable.

3: Don’t play it too safe; it’s okay to make wrong decisions as long as you learn from them.

Throughout it all, realize that nothing you do will ever make everyone happy.

Avatar, for example, is the top-grossing movie of all time — yet it boasts only an 82% on Rotten Tomatoes, and a 7.5/10 user score on MetaCritic.

This is an important point to remember. Especially when your products are more creative, some amount of critical feedback is inevitable — no matter how successful your products end up being.

It’s impossible to please everyone. If you try, you’ll delight no one, and end up with something that’s banal and average.

At the end of the day, you have to recognize that receiving critical feedback is simply a part of building a company, and more generally, of doing difficult work.

Those who end up succeeding in their industry don’t do so because they somehow avoided ever making mistakes or producing projects that had flaws, nor did they build something that everyone loved off the bat. Rather, those who succeed possess an ability to separate useful, actionable feedback from the noise that doesn’t ultimately matter.