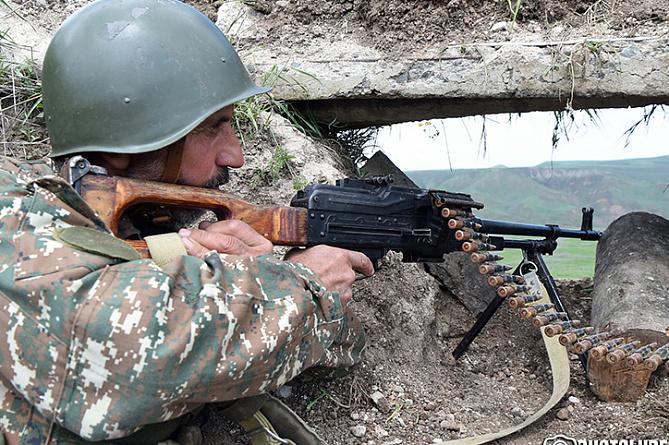 YEREVAN, February 19. /ARKA/. Azerbaijan is unlikely to resume hostilities in Nagorno-Karabakh until the renewal of the negotiation process, an expert on Azerbaijani issues Taron Hovhannisyan said today. Speaking at a news conference, he said if Azerbaijan renews hostilities in the conflict zone it would show once again that it does not care about the OSCE Minsk Group co-chairs and is unwilling to join the peace negotiation process.

According to the expert, one should not believe that the stable situation on the border will continue for a long time.

One of the reasons preventing the resolution of the Karabakh conflict, according to the expert, is the xenophobic anti-Armenian propaganda in Azerbaijan.Hovhannisyan believes that Azerbaijani President Ilham Aliyev and the authorities of that country are trying to put pressure on Armenia and Artsakh by threats of war. ‘If we analyze Aliyev’s statements in 2018, we will see that this policy has not changed,” he said.

The Nagorno-Karabakh conflict erupted into armed clashes after the collapse of the Soviet Union in the early 1990s as the predominantly Armenian-populated enclave of Azerbaijan sought to secede from Azerbaijan and declared its independence backed by a successful referendum.

On May 12, 1994, the Bishkek cease-fire agreement put an end to the military operations. A truce was brokered by Russia in 1994, although no permanent peace agreement has been signed. Since then, Nagorno-Karabakh and several adjacent regions have been under the control of Armenian forces of Karabakh. Nagorno-Karabakh is the longest-running post-Soviet era conflict and has continued to simmer despite the relative peace of the past two decades, with snipers causing tens of deaths a year.