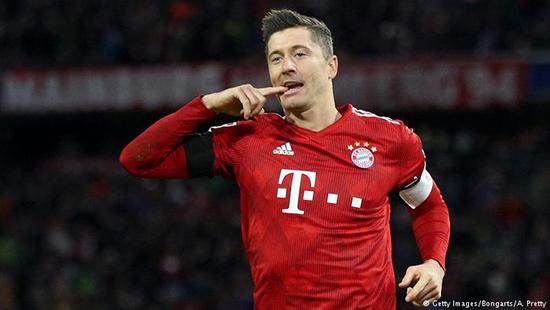 The second of three Anglo-German Champions League ties begins on Tuesday with a clash of two of Europe’s biggest beasts. Ahead of the game, DW takes a look at the on-pitch battles that will define the big last-16 clash.

Though he has sometimes played through the middle this season, the likelihood is that, on Tuesday, Mohamed Salah (above, right) will look to find the spaces behind his attack-minded Austrian opponent from the right, where he’s deadly cutting in on his left foot. The Egyptian has 20 goals already in 2018-19, including 10 in his last 11 games, and is the home side’s biggest threat.

Despite being nine days younger than Salah, Alaba’s 72 Champions League appearances are more than double those of his direct opponent and his experience and composure could prove critical, particularly if Liverpool start to get on top and get the Anfield crowd going early. Alaba (above, left) is also quick enough to keep pace with the explosive winger better than most but may have to curb some of his more adventurous instincts, though his is an attacking outlet Bayern will miss if he doesn’t get the balance right.

Virgil van Dijk is the world’s most expensive defender and has lived up to his price tag this season, leading a Liverpool defense that looked shaky last term to 14 clean sheets in 26 league games and the Premier League’s best defensive record this time around. But the Dutchman is suspended for Tuesday’s clash at Anfield and with Dejan Lovren not certain to be fit, there’s every chance midfielder Fabinho will be the man who slots in alongside former Schalke man Joel Matip.

The Brazilian has decent defensive instincts but is far from a natural in the role and may struggle to cope with the movement, instincts and finishing of the Polish striker. Robert Lewandowski made his name under Liverpool boss Jürgen Klopp at Borussia Dortmund and told UEFA this week that the German boss “released that striker’s instinct in me.” If the 30-year-old adds to his eight goals from six Champions League games this term, Liverpool’s German coach may come to regret that.

With Fabinho deployed further back, the Liverpool skipper is the man most likely to be the man at the base of the home side’s midfield. He’ll be up against a player starting to make a real impact in Bayern’s midfield and named Bundesliga Player of the Month for January after four goals in three games following the winter break. A record-breaking quick own goal against Augsburg on Friday night didn’t overly dent Goretzka’s confidence, with the former Schalke man later claiming an assist.

Despite his leadership status, Henderson hasn’t always been the most popular figure at Anfield with the perception that he can be unambitious in his passing and slow down play. The England international has grown into a deeper role under Klopp but will have to be aware of Goretzka’s tendency to ghost in to goal-scoring positions late. For his part, the German will need to stop Henderson rapidly finding Liverpool’s dangerous front three, a feature of the Premier League side when they are at their best.

Despite an injury scare on Friday, the French flyer is expected to be fit to line up on Bayern’s left. With Franck Ribery making the trip late after becoming a father on Sunday night and Arjen Robben out, Coman will almost certainly be the man to test the young Liverpool full back. Alexander-Arnold’s improvement since breaking into the first team last season has been startling but he’s still prone to occassional lapses in positioning and concentration.

Afer a brace and an assist on Friday, Coman looks to be back to full fitness after missing the first three months of the season with a knee injury. His speed and dribbling ability have never been in doubt but the former Juventus man hasn’t always delivered the end product his play often promises – a goal every 400 minutes in the Bundesliga is a figure that must be improved, and Tuesday seems a good time to start. At the same time, Alexander-Arnold, much like Liverpool left back Andrew Robertson, offers a genuine attacking threat. As Paris Saint-Germain found out in the group stage, stationing wingers too high up the pitch against Liverpol can be fatal.

Sir Alex Ferguson: ‘Did I think we could still beat Bayern in 1999? No chance!’