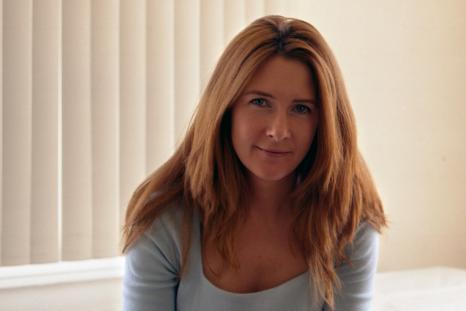 About five years ago, Tabitha Soren was on a plane attempting to read a book on her iPad. The “super annoying” glare from the overhead light was making it hard to decipher the words, illuminating, instead, the graphic marks created by her hand as she swiped the screen to move from page to page. “I thought, Oh, this sort of looks like a new version of a painting by Franz Kline,’” Soren tells Newsweek. “There might be something here.”

Soren, an early MTV News reporter (notable for, among other things, interviewing Bill Clinton more than any other reporter in his eight years in office), has, for over 10 years, been engaged in a second career as a fine art photographer. (Her Running series has shown in museums across the U.S.) Looking at the Kline-esque smudges got her thinking about a new series, which commenced after a few false starts. She began by shooting the surface of iPad screens with a Hasselblad, producing “delicate and serene” silver gelatin prints in her darkroom. “I thought, You know what, these aren’t a new version of Franz Kline, they’re a poor man’s version of Franz Kline,” Soren says with a laugh. “I’m going to have to bring this to another level.”

Two years later, she had switched to color and to including the iPad’s background images, rather than just the trails of physical contact we leave on our screens. “Once I did that, I felt like I was dealing with something I hadn’t seen before. It was also a lot more contemporary, with the edge and the conflict that I feel in my head when I’m struggling to keep up with the demands of technology, or fighting with my son to get off technology.” (That would be Walker, one of her three children with the nonfiction writer Michael Lewis, author of Moneyball and the current best-seller The Fifth Risk.)

The images she chooses, which are drawn from the news, social media, Vimeo or phone photos (she does not use the work of professional photographers or videographers), “raise questions of authenticity and explore the difficulty—or lack of desire—to distinguish between reality and fiction.”

Soren’s ability to balance art with parenting is, she acknowledges, much more productive thanks to advances in technology—advances she did not have in her first career. “However,” she says, “it also clashes with my state of mind.”

Creating the images is a painstaking process. Soren uses a boxy, old-school camera, on a tripod with a hood, to shoot the iPad screen, and a harsh light to highlight the grime on the surface. “You load the negatives one at a time, and you can’t see how it’s going to turn out ahead of time,” she says of the 8-by-10-inch images. “It’s a bit like trying to capture lightning in a bottle.” Soren then scans and processes the negative digitally, “because I’m impatient for the result.” For “Surface Tension,” a tightly curated show of 20 images from this series at the Davis Museum at Wellesley College in Massachusetts, Soren blew up each work to 5 by 10 feet.

These larger images have a haunting, sometimes unsettling effect, the smudges resembling brushstrokes. A few of the landscapes, in particular, are reminiscent of the more abstract work of the 19th-century British master J.M.W. Turner. “I had a piece in a group show, and the docent told me a lot of people thought it was a painting, until they spent some time with it,” says Soren, who thinks the effect has to do with the film negatives, which have a lusciousness we don’t often see in digital photographs. “The most painterly image is of the Ferguson, [Missouri] protests,” she says, “and that was from a news story on a website which would never exist without the internet: TruthOut.org.”

The contrast between the analog and the digital excites her, “though I can’t say it was a motivating factor for the series. I do think there is a clash between the two: We’re hairy, sweaty, dirty and teary, and these machines are perfectly smooth and oil resistant. I love that the juicy grime from our fingers is so antithetical to the chilly detachment of digital flow.”

As Soren notes, she isn’t the first person to reflect on the clash between humanity and technology. Among others, E.M. Forster wrote the science fiction short story “The Machine Stops,” about humans wholly dependent on an omnipotent machine, over 100 years ago. But she is presenting the same questions in a roundabout way: “How are we going to live without these things, but how are we going to live with them?” She mentions a 2018 Pew Research Center study with an alarming statistic: Nearly a quarter of Americans are almost never offline. “I truly believe that the effects of technology will outrun what we know about what it’s doing to us,” says Soren.

The 20 images chosen for the Davis show have a common theme: touch. All of the series, of course, involves physical interaction with a screen, but here the background images relate to touch as well. In one of the most powerful, particularly in light of the allegations of sexual abuse that led to the #MeToo movement, Harvey Weinstein is leaning into actress Kate Beckinsale. “Her physical gesture, of trying to move as far from him as possible, is so potent, and yet she can’t escape the frame of the photograph,” says Soren. “In that case, the touch is harmful.”

The wash of red color was added by the artist. “Sometimes, for variety, I wear one of those headlamps, the kind used for emergencies or by miners—or by my husband when he’s barbecuing! I shake my head while the exposure is going. In this case, I added a red light, a color associated with rage and danger.”

Another image, of a glacier (see above), came from a friend on vacation. “It’s definitely about the damage that humans have done to the very beauty we seek out,” says Soren. “But I also find it perplexing—and I do this too—that the same people who fail to recognize beauty when it’s in front of their nose will respond to it when it’s in a photograph. I feel like we’re growing accustomed to being served our experience and to having it mediated before we embrace it as our own.”

A third image, of basketball stars Kevin Durant and LeBron James, is related to the work of Dacher Keltner, the founding director of the Greater Good Science Center at the University of California, Berkeley, located near Soren’s home. He and his team studied basketball players and found that the more athletes touch each other in a positive way—through butt-slapping, high-fiving or chest-bumping—the more likely they are to win the game. Soren saw this as indicative of what we gain from physical touch and lose without it. “It’s the sense scientists know the least about,” she says, “but it definitely has been proven to lower stress levels, to create a feeling of compassion.”

Soren notes that through our browser histories “we’re having our identity reflected back to us, by what we’re looking at, curating or responding to. The series adds up to some kind of self-portrait, I guess.”

Two of her particular concerns are the environment and social justice. An image of Kalief Browder’s prison cell—where he spent two years in solitary confinement for a petty crime he didn’t commit—is “really ominous,” particularly blown up to 8 by 10 feet. “Browder, bless his heart, was isolated from any human touch for years,” says Soren. “And then of course he took his own life—a very extreme form of touch.”

Digital images, says Soren, “serve to emphasize that a person in a photograph is fundamentally not there,” even if physical bodies are visually represented. “This is part of the horror of photography: its foundational ability to generate morbidity and dread and anxiety, not to mention nostalgia, a closely related pathology.” And that, she adds, makes digital images “truly the medium of modernity”—not to mention our particularly anxious moment in time.

“You’re not going to walk into my show and start thinking about Trump,” says Soren. “But there is this connection between us having a president who thinks he can make the rules and come up with his own version of the truth and the fact that social media and digital culture believe that virality is veracity.”

Tabitha Soren’s “Surface Tension” is at the Davis Museum at Wellesley College in Wellesley, Massachusetts, through June 9.