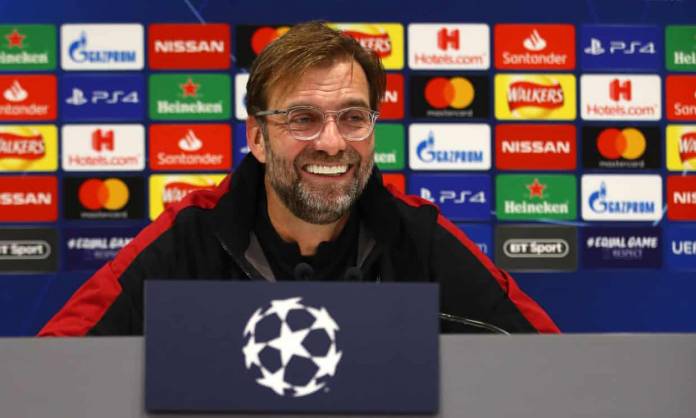 – Manager convinced Bavarians will exploit any slips
• ‘There is no obvious problem, it makes them more dangerous’

Jürgen Klopp has studied Bayern Munich’s last seven matches as homework for the return of the Champions League at Anfield. “And I did not get up once afterwards and think: ‘It’s clear, this is where we can have them’,” reflected a manager who, through personal experience and realistic analysis, is uneasy with the idea that Liverpool will welcome a fading side on Tuesday.

“They are still a force, nothing else,” said Klopp, the last man to prevent Bayern reigning as Bundesliga champions. That was seven years ago now. A transition with a new generation of emerging talent was inevitable, the former Borussia Dortmund manager insists. He is equally convinced the experienced core of Niko Kovac’s team, one that trails Dortmund by two points in the Bundesliga table, can reassert the club’s European credentials should Liverpool’s focus waver in the first leg of the last-16 tie.

Klopp said: “They had [Pep] Guardiola, one of the most demanding managers in the world, and they played fantastic football and won the league three times. Then [Carlo] Ancelotti, who now does a brilliant job at Naples, and it didn’t work out. So they bring [Jupp] Heynckes back, he manages all the trouble and settles it down to be successful again. Now they have to change it completely with a new manager, a few very experienced players injured and some young players coming up. That’s not a struggle. That’s a normal adaptation to the situation.

“There is no obvious problem. For me, the way I have to see it, it makes them more dangerous. The league is not the situation they want but in this competition they are exactly where they want to be. They will be more focused. Nobody is flying, brain-wise, in Bayern at the moment because they are chasing the league but everything is possible for them. We have to be aware of that.”

Everything remains possible for Liverpool in the Premier League and it was evidence of the strides made under Klopp that he and his captain, Jordan Henderson, were asked on Monday whether they would prefer to reign domestically or in Europe. “I’d choose both,” Henderson replied. Liverpool are without the suspended Virgil van Dijk for the first leg and, with Dejan Lovren yet to complete a full training session following a recent hamstring injury, Fabinho is expected to partner Joël Matip in central defence. Roberto Firmino is also doubtful with illness. Kovac was not overly enthused by Liverpool’s absentee list.

“If you look at what Liverpool did in the Champions League last season and what Liverpool are doing in the Premier League this season, then you have to say Liverpool is the most difficult draw that there is,” the Bayern manager said. “I don’t know if there is a favourite or not. Liverpool has respect for us as we do for them.”

Henderson admits the painful memories of last season’s final linger with Liverpool but serve only to motivate. “When you lose a final it always stays with you. Always,” the midfielder said. “You always want to use that as motivation to get back there and put that right. I feel as though we used the Europa League final defeat in the right way. We progressed from there and we need to do the same with the Champions League and keep improving. We need to use that as determination to get back there. And if we get back there, hopefully we will go one step further.”

Bayern were responsible for Klopp’s first Champions League final defeat in 2013, having also considered the then Mainz manager as a potential replacement for Ottmar Hitzfeld five years earlier. The job went instead to Jürgen Klinsmann.

“The story is pretty much all true,” Liverpool’s manager confirmed: “Apart from the claim that I was angry when they called me to say they had decided on the other Jürgen. I was not angry. I never expected they would go for me. I was a second division manager in Germany, a Championship manager if you want, and who would expect that Bayern calls you? It was more of a shock in the first moment. It was Uli Hoeness on the phone. I would never have told the story but Uli Hoeness spoke about it and I can confirm that’s how it was.”

Klopp added: “A couple of people called me in the last few days to tell me Germany, or football Germany, is going mad over this game and that’s how it is. But making these kind of personal battles out of it I don’t understand. I don’t see it as a personal thing for me. It is two big clubs facing each other and I am really happy to be part of this game. It’s a big one. It is a game you want to see and maybe that is the biggest achievement for my team so far – we are back not only in the competition but people think we could win it. That’s good but still a lot of work to do.”