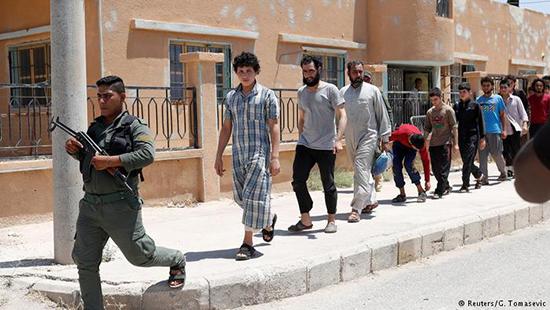 US President Donald Trump is pressuring Europe to take back its citizens who were captured in Syria while fighting for the Islamic State group. It’s high time the continent address the issue, says DW’s Matthias von Hein.

The message came in typical Donald Trump manner: lacking in style and bordering on extortion. But, like it or not, there is some validity to the United States president’s demand that European countries take back their citizens who fought for the Islamic State group (IS) and are currently being held in Kurdish captivity.

Local Kurdish authorities have long been asking that the hundreds of European fighters imprisoned in northern Syria be taken off their hands. That request was intentionally ignored, but now the White House has stepped in.

There are hundreds of detained women from Germany, France and the United Kingdom who face an uncertain future, for instance — many also have children born in IS territory. And after the fall of the last IS-held position in Baghuz, their numbers are likely to rise even further.

The prisoners are becoming an overwhelming burden for the Kurdish authorities. That burden is only likely to increase after Trump announced the withdrawal of US military forces in Syria late last year — a move which also brought with it larger existential questions for the persecuted Kurdish minority.

As soon as the US withdrawal clears the way for the Turkish military, Erdogan intends to establish a 30-kilometer (18.6-mile) -wide security corridor along the Syrian border. But the most important Kurdish settlements — and also the prison camps — are in this zone. As the Kurds fight for their survival, they certainly have bigger concerns than taking care of their IS prisoners.

When it comes to this issue, Germany has been hiding behind formalities instead of actively seeking a solution, even one that could be addressed on a European level. In the hope that the problem might somehow resolve itself, the German Foreign Ministry retreated to a position of convenience; it says it has not been able to provide consular assistance in Syria since the closure of the embassy in Damascus in 2012, and there are no official diplomatic ties with the Kurds in northern Syria.

Of course, no country really has an interest in accepting dozens of IS fighters, but that does not change the fact that these people still exist and need to be dealt with. And because Germany is a state that operates under the rule of law, its citizens who belonged to a terrorist militia still have rights and, as politically difficult to bear as it may be, this also includes the right of return. Every one of them must be individually proven guilty in order to be convicted.

The bottom line is that these people have come from the very midst of German society. They radicalized here — we have to deal with them. Perhaps there could be room for some creative solutions: What about bringing IS members before the International Criminal Court in The Hague? Regardless, one thing is absolutely certain: Northern Syria cannot remain Europe’s Guantanamo.