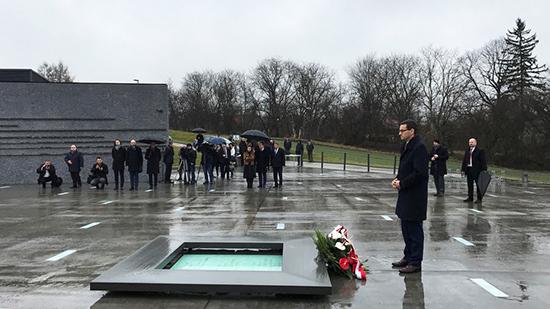 Russia  Today
Historical tensions have reignited as Poland pulls out of talks in Jerusalem following ‘racist’ comments by Israel’s new FM implicating Poles in anti-semitism and the Holocaust, resulting in the Visegrad 4 summit’s cancellation.

Poland’s PM Mateusz Morawiecki issued Israel an ultimatum Monday, telling Tel-Aviv that if they didn’t apologize for the comments, Poland would pull out of the V4 talks scheduled to take place in Jerusalem the following day. Shortly afterwards, Czech Prime Minister Andrej Babis announced that the summit would not take place at all without Poland’s participation, and would be replaced by bilateral talks between the remaining nations.

Israel’s interim Foreign Minister Yisrael Katz issued the controversial comments on Sunday not long after being appointed to the position. In conversation with Israel’s i24 news, he echoed Netanyahu’s earlier claims of Polish collaboration with Nazi Germany, and even upped the ante with a quote from former Israeli PM Yitzhak Shamir that, “Every Pole suckled anti-Semitism with his mother’s milk,” adding that, “Nobody will tell us how to express our stance and how to honor the dead.”

Morawiecki called the comments “racist and unacceptable,” issuing his ultimatum with a vow not to leave the insult unanswered.

In response to the “insulting” statement, Israel’s ambassador to Warsaw, Anna Azari, was summoned by the Polish Foreign Ministry for the second time this week.

It was only yesterday when Morawiecki personally called Netanyahu to say he would not be attending the talks himself in protest of his Israeli counterpart’s comments last week in Warsaw.

Unperturbed by Morawiecki’s decision not to participate, Katz initially answered casually, saying that “there is no crisis,” as the “foreign minister will attend.” Since the Czech Republic’s announcement, however, the Israeli Foreign Ministry has responded confirming the cancellation: “There will be no full V4 meeting. Three PMs are arriving, will hold meetings with (Israel’s) PM.”

Today’s events are only the latest development in ongoing tensions between Israel and Poland. Relations have suffered since Poland passed its controversial Holocaust law last year which prohibits implicating the Polish government in the historical crimes of the Nazi regime.

Responding to Israel’s accusations, the Polish PM pointed out on Twitter that 6 million Poles were killed during the Nazi’s occupation of the country, including 3 million Poles of Jewish origin.