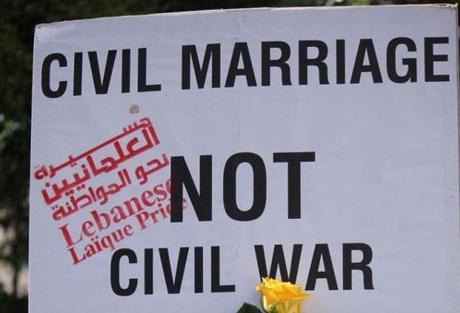 The Progressive Socialist Party on Monday threw its support behind calls for legalizing civil marriage in Lebanon.

“The Progressive Youth Organization regrets that so far there is no national consensus on devising a clear mechanism and measures for holding and registering civil marriages in Lebanon,” the PYO — the PSP’s youth organization — said in a statement.

The organization accordingly called on the relevant authorities to draft a “clear law,” noting that “the country has acknowledged its soundness and rightfulness.”

“Marriage is a basic right and the method in which couples choose to wed is a right guaranteed by the Lebanese constitution,” the organization stressed.

“Can we voice our opinion without being accused of apostasy? Yes, I’m a supporter of volitional civil marriage and I call for a civil personal status law. Enough with using religion to divide citizens,” Jumblat said.

“We call for showing openness towards this proposal and discussing its aspects and conditions objectively, without overbidding and bigotry, seeing as we see in it a gateway for further positive interaction among the various components of the Lebanese society,” al-Sayegh tweeted.

In the first comment by a religious authority over the renewed controversy, Dar al-Fatwa, Lebanon’s highest Sunni Muslim authority, said its stance that “categorically rejects and opposes civil marriage in Lebanon has been well-known for years.”

“It fully contradicts with the rules of Islamic sharia and also violates the stipulations of the Lebanese constitution in terms of the need to respect the personal status law that is applied by the religious courts of the Lebanese,” Dar al-Fatwa’s press office said.

In an interview with Euronews, Minister al-Hassan said she is personally in favor of having a “framework for civil marriage” in Lebanon.

“I will talk about this issue and seek to open the door for serious and profound dialogue over the topic with all religious authorities and other officials, supported by Prime Minister Saad Hariri, so that civil marriage can be acknowledged,” al-Hassan said.