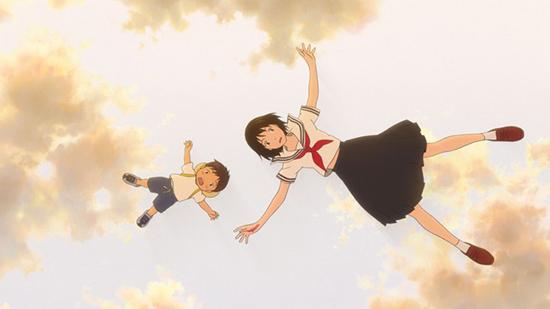 The animated film from Mamoru Hosoda is also a timely reflection on how societal expectations for Japanese fathers are slowly evolving.

If you’ve watched the trailer for Mamoru Hosoda’s Academy Award–nominated Mirai, you’d be forgiven for thinking that it looks a little childish. The Japanese film follows Kun-chan, a 4-year-old boy grappling with his jealousy of his new infant sister, Mirai—until, in a fantastical twist, he encounters Mirai’s future teenage self. For the most part, the movie is eye-level with the little boy; tensions in the film erupt as tantrums, and magic is accepted without much skepticism or comment. Plot points revolve around the mundane experiences of everyday life with small children, like picking up toys or getting lost in a train station.

Many critics have commented on the youthful perspective of the film. In a New York Times review, Bilge Ebiri wrote that Mirai felt “like the dream of a very wise child.” Vulture’s Emily Yoshida remarked that “Mirai’s baby-centric premise seems like guaranteed adorability at first glance.” While these observations are accurate, in the background of Mirai’s tale about childhood unfolds another narrative: that of Kun-chan’s father. By telling his story, Miraireveals itself to be not only about a boy and his sister, but also about a man finding his footing at a time when traditional gender roles for Japanese parents are being widely challenged.

We first meet Otōsan (Japanese for father) via a slow pan from the feet upward as the camera mimics the sweep of Kun-chan’s eyes from his toddler vantage point. Otōsan and Okāsan (Japanese for mother) have just come home from the hospital with Mirai. Kun-chan throws himself at his mother’s legs, sobbing that he was lonely while she was gone; he ignores his father. As the film unfolds, it becomes clear that more than one major adjustment is occurring in this household. For the couple’s second child, Okāsan will be cutting her maternity leave short and returning to work. Otōsan, an architect who has just turned to freelancing, will be handling the majority of the household chores and child-rearing duties.

Hosoda at first illustrates this transition with hilarity and chaos. The morning after Mirai arrives, the family is at the kitchen table. Kun-chan shouts for his breakfast, for milk, and for a banana—each demand prefaced by a whiny “Okāsan!” But his mother sits mutely at the edge of the frame, completely focused on breastfeeding her newborn. Instead, Otōsan yelps “Yes!” to each plea, answering to the name “Mother” and scrambling to procure the thing Kun-chan has asked for; each time, Kun-chan stubbornly pushes away whatever his father hands to him. Otōsan’s good intentions and sincere efforts to step up as a caretaker won’t necessarily be enough, Hosoda suggests, to immediately reorder the family’s power structure.

At one point, Okāsan mentions that when Kun-chan was born, Otōsan was never home, so she’d assumed men were naturally uninterested in babies. As she describes how she did everything by herself, Otōsan makes half-hearted, apologetic noises. While the main story follows Kun-chan as he bonds with his younger sister from the future, Hosoda uses bits of background conversation to hint that Otōsan was perhaps not always the most present father and husband. While there’s a more universal quality to Kun-chan’s conflict—going from being an only child to a big brother—Otōsan’s transformation is one that resonates, especially with a broader cultural shift in Japan.

In interviews about Mirai, Hosoda has said that he has tried to “depict Japan’s societal problems and the family, and how they’re connected,” drawing particular attention to the country’s growing childlessness and changing work culture. Last December, the Ministry of Health, Labor and Welfare reported that the number of babies born in Japan had fallen to the lowest on record with an estimated 921,000 births in 2018, continuing the country’s sharp population decline. Add to that a rapidly aging labor force, as well as Japan’s infamous workplace culture, where more than 40 hours of overtime a week are the norm, and karoshi (death by overworking) is not unheard of. To combat these problems, Prime Minister Shinzō Abe has proposed reforms to cut down on overtime, as well as policies to promote “womenomics,” or the idea of boosting labor participation by women in order to fill the gaps left behind by the elderly.

Though promising in theory, in practice both of these proposals have flailed. A recent New York Times story describes a bleak reality where Japanese women are now tasked with working in and out of the home—a far cry from the empowered, egalitarian households envisioned by womenomics. According to the Organisation for Economic Cooperation and Development, Japanese men do the fewest hours of household chores among men in OECD nations. A separate study by Keio University professor Noriko Tsuya (also referenced in the Times piece) found that Japanese men average less than five hours of housework a week in homes, while women with 49-plus-hour workweeks usually do 25 hours of housework. Other policy changes intended to be ambitious have proven toothless, as the much touted Work Style Reform Billcurrently has almost no provisions for legal enforcement.

Though the government has officially placed a cap on overtime (100 hours per month), there are loopholes such as the “highly skilled professionals” system, which allows white-collar employees to be exempt from overtime rules. Even when overtime hours are cut, NHK reports that some men don’t return home, thus avoiding the burdens of housework and childcare. This phenomenon has given rise to a new Japanese slang term: furariiman. A take on the Japanese salaryman, furariiman is an adjective used to describe the aimless wandering of salarymen who, even after finishing work at a reasonable hour, meander around public parks and convenience stores to avoid going home to their families.

Thus, Japan faces these twin social dilemmas: urging female labor participation while also needing mothers to birth and raise babies, and trying to ease brutal workplace conditions to allow men and women more time at home, only to create a fleet of vagabond men who refuse to return to their households. It’s during this ongoing moment of families in flux and parents in crisis that Mirai arrived in Japan.

Hosoda’s film is both a light-hearted fable and an optimistic vision of fatherhood, one that reimagines a man’s role in Japanese society with honesty and humor. Mirai is filled with scenes of Otōsan faltering and failing; he’s a kind but sometimes selfish person with much to learn. Formerly a full-time worker, Otosan visibly struggles with balancing his freelance architectural career with childcare, a nod to the linked realities of shifting workplace and family culture in Japan. He runs back and forth to daycare, carting his children around, and when he finally sits down to work on a project, he’s too exhausted to focus. On the parenting front, he can’t hold his daughter without her crying, nor can he teach his son to ride a bicycle without Kun-chan acting out.

Even society at large is skeptical of Otōsan’s abilities. Early in the film, Otōsan is shown humblebragging in the front yard to a group of mothers, saying it’s no big deal for him to take care of the kids, while the women ooh and ahh at his stay-at-home status. Otōsan goes back inside, cheerfully placing a pot of water on the stove and obviously preening. Okāsan looks up at him, irritated. She lets him know that the women aren’t fooled by his nonchalance and that they gossip about him behind his back. As she finishes her tirade, the pot boils over. Otōsan dives to mop up the water on the ground with a rag, but Okāsan coolly informs him the cloth he’s using is meant for table spillage, not floor spillage. He slumps, dejected.

By showing us Otōsan’s efforts to feign competence and Okāsan’s refusal to protect her husband’s feelings, Hosoda complicates the idea of men as primary caregivers. Mirai doesn’t want Otōsan to be seen as a societal martyr or to receive more credit than he actually deserves. For Hosoda, Otōsan’s personal journey as a parent can’t be spurred on by optics or false confidence; he must first realize his own shortcomings by making mistakes, and only after learning from them can he become a better parent.

At times, Hosoda seems almost merciless in his portrayal of Otōsan’s blundering. This might be in part because Mirai is based on Hosoda’s own family and their experience of having a second child, which is to say the filmmaker knows intimately what it’s like to stand in Otōsan’s shoes. Though the father is technically a supporting character in Mirai, he’s given a decent amount of screen time and is voiced by arguably the most recognizable actor of the ensemble (at least for Japanese audiences): Gen Hoshino, who rocketed to stardom in 2016 for his portrayal of the romantic lead in super-hit drama Nigeru wa Haji da ga Yaku ni Tatsu (incidentally, also about different family structures in Japan).

There’s no satisfying Rocky-style montage where Otōsan gets visibly better at his fatherly duties over the course of minutes; instead, viewers are presented with imperfect moments of success and failure, jumbled together. In one poignant scene, Otōsan despairs after failing to teach Kun-chan how to ride a bicycle without training wheels, a task that feels quintessentially fatherly. By the time Kun-chan is wheeling through the grass on his own (thanks to a time slip to post–World War II Japan to visit his great-grandfather), Otōsan has accepted his uselessness as a bicycle instructor. Instead he stands off to the side, cheering his son on in amazement and joy. It’s as if he realizes that the most important part of parenting isn’t the coaching itself, but offering unequivocal support.

Hosoda has said that Otōsan is meant to depict the “modern father,” whose existence is “difficult to express.” He points to the way families are changing and can no longer be defined by a stay-at-home mother, a working father, and multiple children. Now, he says, we’re in an age where we search for and pick our own families (a prominent theme in Hirokazu Kore-eda’s Shoplifters, which is nominated for a Best Foreign-Language Film Oscar). Though men becoming primary caregivers may not be the answer for every family, or even the solution to Japan’s myriad social ills, at Mirai’s conclusion, viewers are left with an Otōsan who’s still searching but who has chosen fatherhood for himself. He isn’t a perfect parent, but he’s committed and growing.

In the final scene, Otōsan is shown packing the car with his wife for a trip. While their earlier conversations were marked by doubt about Otōsan’s parenting abilities, the duo are now companionable as they discuss how the other has changed. Okāsan says Otōsan seems kinder now—kinder, even, compared to before they had children. Otōsan remarks that Okāsan seems the same. Together, they call out to Kun-chan and Mirai, who respond to both of them, ready for wherever their journey as a family may take them next.