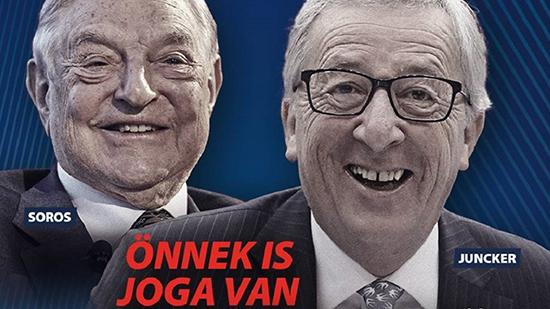 A new media campaign by the Hungarian government accuses globalist billionaire George Soros and the EU of pushing open-borders policies. Brussels indignantly dismissed the campaign as a conspiracy theory and fake news.

The EU Commission rushed to outright dismiss the ad campaign, calling it a conspiracy and “fake news,” without going into detail in addressing Budapest’s concerns.

“It is shocking that such a ludicrous conspiracy theory has reached the mainstream to the extent it has. There is no conspiracy, Hungarians deserve facts, not fiction,” spokesman Margaritis Schinas told reporters in Brussels on Tuesday. The facts, according to Schinas, are that the EU has “zero plans” for humanitarian visas, while member states get to decide on the level of legal migration.

On the other hand, Brussels has repeatedly clashed with Budapest over Hungary’s immigration policy – or rather, its refusal to support the open-borders approach ushered in by German Chancellor Angela Merkel in 2015. Time and again Hungarian Prime Minister Viktor Orban has rejected EU demands to admit migrants, building a fence with Serbia and even EU member Croatia in order to secure his country’s border.

Meanwhile, Soros has openly advocated immigration as the solution to Europe’s dwindling birthrates, and berated Hungary and other “populist” members for endangering the survival of the EU, comparing it to the Soviet Union circa 1991.

With elections for the European Parliament scheduled for May, Orban’s Fidesz party does not hide the desire to have the anti-migration bloc become a majority.

However, government spokesman Zoltan Kovacs denied that the latest campaign is related to the upcoming election, saying it was aimed solely at informing Hungarians.

Juncker, his vice-president Frans Timmermans, and EU commissioner in charge of Brexit Guy Verhofstadt pointed to the campaign as yet another reason to expel Fidesz from the European People’s Party (EPP) bloc, currently the majority in the supranational body.

“I don’t think the conservatives in Hungary represent Christian democratic values in any way,” Juncker said on Tuesday. “There is no overlap at all between Mr. Orban and me … so I am of the opinion that his place is not in the European People’s Party.”

This is not the first time Orban has accused the Hungarian-born Soros of seeking to undermine Budapest’s policies. One such billboard campaign, in July 2017, was even accused of anti-Semitism. This prompted Israeli Prime Minister Benjamin Netanyahu to step in, with a statement that criticism of Soros is legitimate and not anti-Semitic.

Last summer, Hungary passed the ‘Stop Soros’ law, outlawing aid to illegal immigrants and cracking down on pro-immigration NGOs that were by and large funded by the billionaire. As a result of the law, Soros’s Open Society Foundation packed up its operations in Hungary, and the Central European University he funded moved to Austria.