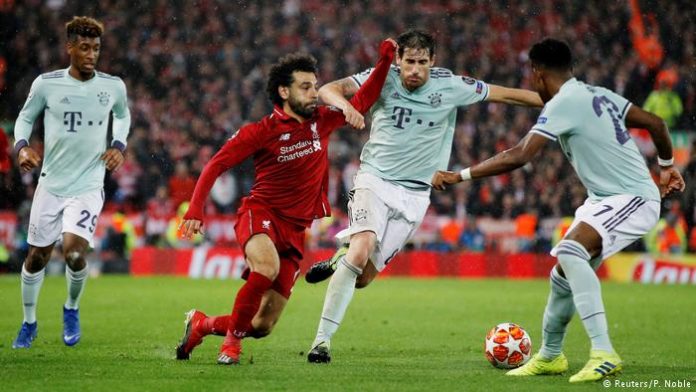 Bayern Munich is a club used to dominating. But on Tuesday, the German champions showed they can also cope with adversity, with some unsung players stepping up to help a new core starting to emerge.

There was a time, and it’s really not long ago at all, when Bayern Munich facing a Champions League knockout match without Arjen Robben, Franck Ribery, Thomas Müller and Jerome Boateng would have struck an unfamiliar but nagging note of angst among their traveling support.

While that particular emotion may have become more familiar this season, the pangs of player absence became mere murmurs on a cold Tuesday night at Anfield. The core of the German champions’ next generation strengthened around those they will eventually replace in a performance of discipline, belief and unity that impressed Niko Kovac in his first Champions League knockout tie.

“The structure that we had in the game made it hard even for Liverpool to score,” he said after the scoreless draw. “We achieved our goal. We knew who we were playing and that they have fast players but we defended well and were very compact.”

Despite the late withdrawal of Leon Goretzka (24), the side Kovac picked had an average age more than two years younger than that which started his first Champions League match against Benfica last September (29 vs. 26.7).

Kovac admitted that elements of his team selection were enforced but had proved a happy accident as the maturity and composure with which some of his younger players handled a raucous atmosphere offered hope, not just for this tie but for the future of this team.

Sometimes new eras start with a bang, with a show of daring and vigor. This wasn’t such an occasion, with Kovac’s men relying on the sort of backs-to-the-wall, defiant performance they are used to inspiring in opponents. But it feels like it could be significant all the same.

Liverpool hadn’t lost a European game at Anfield for 19 matches and hadn’t failed to score in any match since early November but every time they looked like extending that run, a Bayern foot, head, or knee got in the way.

“We made our life a bit difficult with the last pass,” Jürgen Klopp said after the game. “There were about 10 situations, either on the counter or around the box, when we gave it away or shot at their legs.”

The German boss was not wrong and went on to acknowledge that but his side’s frustrations were partly as result of Bayern’s perspiration and also a surprisingly conservative approach from his opposite number.

As the pressure ramped up in the final 10 minutes, even Robert Lewandowski and substitute Franck Ribery, both of whom have had team ethic questioned at times, threw themselves to ground to clear loose balls on the edge of their own box. The old guard were leading by example. Javi Martinez, probably the game’s standout performer, rolled back the years with a performance of bite, anticipation and composure while the big occasion seemed to bring the best out of Mats Hummels.

Crucially, though, the new core of the next Bayern team, led on Wednesday by the ever-lively Serge Gnabry and the increasingly dependable Niklas Süle, were ready and able to play supporting roles.

Encouraging as it was, this was by no means a vintage Bayern performance and neither is it one that solves the flaws that have held them back this term. The visitors weren’t quite capable of taking advantage of the early indecision of Alisson and Fabinho, whose performance out of position went from shaky to secure as Bayern struggled to get out of their own half and turn the tide.

But the Bundesliga side did find a way to keep alive, a quality that becomes ever more important as winter turns to spring.

The job, of course, is far from done, with the return leg in three weeks still finely balanced. But this was a display to rouse Bayern’s future core and one to prove there’s life in a few of the old dogs yet, though those who missed such a display may well be watching from the bench on March 13. The evolution has truly begun, and it won’t have room for too many passengers.