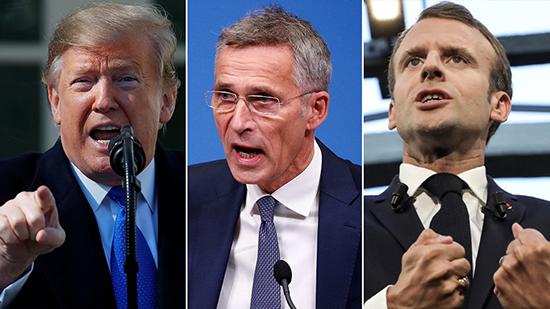 Exactly 70 years after George Orwell’s 1984 came out, most fancy themselves smart to totalitarian doublespeak. But perverse lies need no torchlight or mass rallies, just a tailored suit, complacent media and a docile populace.

We know this, yet hear them so often that they become background noise, and even if they come from the mouths of politicians we do not believe, we let the distortions wash over us, unwilling to expend the mental effort to challenge them every time. But when we stop and think, they barely make any sense.

In fact, the US president is openly urging what he must know will be an armed and bloody uprising perhaps magnitudes more devastating than the violence that has already taken place. A month after the same dove-releasing Western powers barely bothered to conceal how they coordinated efforts to endorse out of nowhere a little known self-proclaimed president, furnishing him with every financial tool and foreign-aid incentive to topple the elected government.

One doesn’t have to be a fan of Chavismo or hate America to appreciate the sheer gall. Unless we think of this peace as some cast-iron Western guarantee for post-revolutionary idyll (hello, Libya and Iraq) the only way these nations could be less peaceful is if they actually invaded Venezuela themselves. And it’s not like they haven’t considered that option.

Close relative: NATO chief Jens Stoltenberg telling the Munich Security Conference at the weekend that Russia’s missiles in Europe are a threat to stability, but that the alliance must invest more in weapons “to keep our people secure” – all while insisting that “we remain determined to avoid a new arms race.”

“We need to build this new space – a free, open and safe internet – which I believe in profoundly, enabling the access of all but also enabling us to ensure our values and our ideals are respected there,” argued Emmanuel Macron in a speech to the UN last November.

So which is it – “free” or “respectful” ? Because, as he has now discovered with the Yellow Vests, in a truly free internet not everyone might share his “values and ideals.”

Further in his speech Macron did little to hide that censorship was his solution to the quandary: proposing an “Internet of Trust” that offered “regulation” that would keep out “enemies” that “enter all our systems, giving the impression they had the same rights as the others.”

From Ruptly Facebook bans, to German social media laws, to the 1984-ish Newsguard, the Internet of Trust is already here.

Close relatives: Fake news. IntegrityInitiative – who, if not these people, should be the inquisitors of online truths? Almost anyone.

Variations of the “Don’t let hate win” refrain are particularly popular among the liberal luminaries even as they spread their love by condemning their political opponents as black-hating or children-caging bigots, denying that they could experience such human feelings as kindness or empathy. All while congratulating themselves on being much nobler people, while occasionally physically assaulting them, if they are Antifa. What a way to defeat hate.

Intolerance for supposed intolerance is an established tactic at this point, and the sympathetic media will clap along as Hillary Clinton talks about “deplorables” or Michelle Obama boasts about how “When they go low, we go high.” The moral high ground was occupied a long time ago.

Close relative: Celebration of diversity. Who could argue with Justin Trudeau or Barack Obama’s assertion that it is indeed our strength? Perhaps those who disagree with them, thus espousing the wrong kind of diversity – of thought. Being the bad kind of diverse is particularly inadvisable for those holding political office or incapable of tear-filled public apologies.