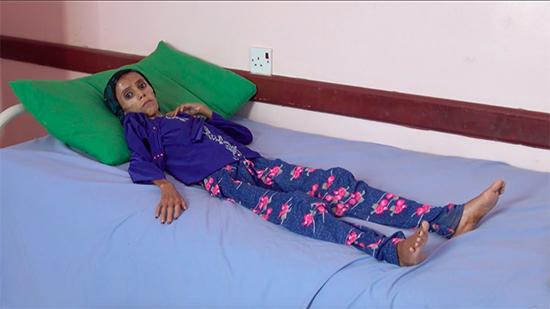 Russia  Today
A haunting video of a severely malnourished 12-year-old girl in Yemen highlights the ongoing devastation of the brutal war that has ravaged the country for four years, as the population continues to teeter on the brink of famine.

Fatima Qoba weighs just 10 kilograms (22 pounds) and is suffering from severe malnutrition. She is being treated at a clinic in Hajjah, where her tiny frame is dwarfed by the bed she lies on.

The head of the clinic, Makiah al-Aslami, said Fatima is “skin and bones due to the hard life of her family,” who are “displaced persons from Al-Sha’ab area who are not provided with shelter, food or medications.”

“Now we talk not only about children under the age of five who don’t have three meals [a day], we are also talking about the next generation who are malnourished because their mothers suffered from malnutrition while they were pregnant,” she said.

The conflict in Yemen has escalated since a Saudi-led coalition began bombing the country in March 2015 in order to reinstate exiled president Abd Rabbo Mansour Hadi, after Houthi rebels loyal to former president Ali Abdullah Saleh took over the capital, Sanaa.

Human rights groups have long been warning of the threat of famine, with a Saudi blockade making the import of goods and humanitarian aid a challenge.

The UN announced Tuesday that the two sides have agreed to begin a withdrawal of forces from the port of Hodeidah, where most of the country’s food imports enter.

The World Food Programme says 15.9 million people wake up hungry in Yemen every day and child malnutrition is among the worst in the world.