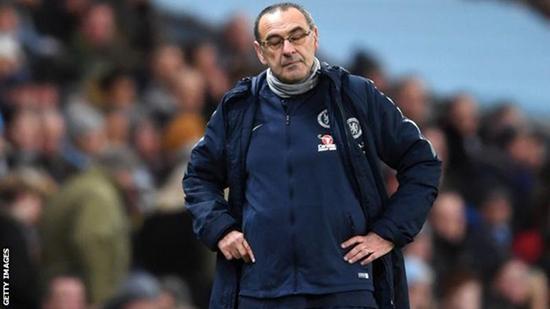 Despite only holding the position for seven months, Chelsea manager Maurizio Sarri is already at risk of being sacked.

Sarri finds himself as the odds-on favourite to be the next Premier League manager to leave their role, while it is also a short price that he doesn’t take charge of the final game of the season.

Chelsea were knocked out of the FA Cup on Monday night with a 2-0 home defeat to Manchester United. They were also hammered 6-0 by Manchester City in their last league outing.

That defeat saw vocal dissent from the Chelsea faithful towards Sarri in the second-half. His substitutions did little to inspire and he refused to change his system despite the need for goals to find a way back into the game. The home support’s expletive-laden chants towards ‘Sarri-ball’ were easy to hear on TV.

Chelsea supporters even joined in as United fans sang “You’re getting sacked in the morning”. He may well get Sunday’s Carabao Cup final against City, a game which Sporting Life will be covering from Wembley, but his long-term opportunities look incredibly limited.

That means that talk of his replacement are already at the forefront of most conversations. The Blues’ best chance of success looks like it will be in the Europa League, and a finish in the top-four is vital for a club like Chelsea.

Tom Carnduff looks at the contenders if the job were to become vacant, alongside odds from Sky Bet, as well as analysing the outsiders.

An obvious choice for a short-term replacement, Zola is currently part of Sarri’s coaching staff as his assistant.

The 52-year-old has plenty of managerial experience with spells at West Ham, Watford and Birmingham in the English leagues alongside Cagliari and Al-Arabi.

During his time at the Hammers, Zola managed to integrate young players such as Junior Stanislas and Zavon Hines. His first year was impressive, earning him a new contract at the end of the season.

That attitude to playing youth could be good news for Callum Hudson-Odoi who wanted to leave the club for more regular minutes at Bayern Munich in January. He continues to be a bench player under Sarri.

Zola came close to success with Watford having led them to the Championship play-off final, only to be defeated by Crystal Palace. Since then though, he failed to move Cagliari out of the relegation zone in Serie A and was sacked after ten matches.

He was given 24 games at Birmingham, although he could only guide them to two wins. While the appointment may be popular with the fans, it would be unlikely to give them the immediate impact that they will hope for.

The French footballing legend is a free agent following his surprise departure from Real Madrid, after two-and-a-half years, in the summer.

With three successive Champions League titles and a La Liga triumph on his CV in a relatively short management career, he could be given the chance to impress in the Premier League.

Zidane was heavily linked with the position at Manchester United, although it seems as if Ole Gunnar Solskjaer has put himself in a position for the job on a permanent basis in the summer.

The 46-year-old is currently the second favourite in the market and is expected to take up a position in the Premier League in the near future. With his success in the Spanish capital, Zidane would be a popular replacement.

He never worked in England domestically during his playing days and his inexperience in this aspect could potentially cost him when compared with other candidates.

Chelsea may have seen the success of Solskjaer at Old Trafford and decide to go down the same route.

Lampard is the club’s all-time top goalscorer with 211 across all competitions, alongside that he was named Chelsea Player of the Year three times during a 13-year spell at Stamford Bridge.

The midfielder won the Premier League three times, the FA Cup four times, the League Cup twice alongside the Champions League and the Europa League in a Chelsea shirt.

He holds a host of records at the club alongside the goals, his four goals against Derby in 2008 and Aston Villa in 2010 means he hit the most Premier League goals in one match.

Lampard also scored the most Premier League goals and FA Cup goals for Chelsea. There’s no doubt that he is a club legend. Not only that, but he has recently taken his first steps into management with Derby.

The Rams sit outside the play-off positions, despite an ambition for promotion this season, but they did knock Manchester United out of the Carabao Cup on penalties at the end of September.

It would be a risky appointment given his inexperience, especially given how his biggest moment in management is currently an argument with Leeds boss Marcelo Bielsa regarding ‘Spygate’.

However, the fans would instantly give him their support and he is a figure who could install that ‘feel-good factor’ back into the club.

This would be an ambitious approach, especially after Simeone recently signed a new deal with current club Atetico Madrid.

The Argentinian, who has regularly been linked with a move to the Premier League, has been in charge of Atletico since 2011.

That league triumph was the club’s first since 1996, and the only time in the last 14 years that a team other than Barcelona or Real Madrid has finished top in Spain.

Simeone also guided Atletico to their only Champions League finals, finishing runners-up to arch-rivals Real in both 2014 and 2016.

As well as that, the 48-year-old former Argentina international has helped the capital club to silverware in the Copa Del Rey, Spanish Supercopa and UEFA Super Cup (twice).

Their Super Cup success in 2012 came against Chelsea with a convincing 4-1 victory, striker Radamel Falcao netted a hat-trick.

John Terry catches the eye with his current price of 16/1. The former Chelsea defender is currently the assistant manager at Aston Villa, working alongside Dean Smith.

A club legend in Ron Harris recently stated that the Blues need Terry back with leadership severely lacking.

Harris, who made over 650 appearances during an 18-year spell at the club, told Love Sport Radio: “One of the biggest losses that Chelsea have had is John Terry.

“John was a leader on the field and he organised things. That doesn’t seem to be happening on the field at the moment. Once you start losing goals, you don’t win matches.”

Like Lampard, Terry won a host of awards in a Chelsea shirt. He was named in the PFA Premier League Team of the Year three times, alongside an appearance in the FIFA FIFPro World XI on five occasions.

His time at Aston Villa is his only senior coaching role though and while he may install some leadership at the Bridge, his inexperience on the touchline would be a problem.

He’s a popular figure among Chelsea fans, and Jose Mourinho could be considered for a third spell in charge.

Over the two stints with the club, the Portuguese lifted the Premier League title three times. That coming alongside success in the FA Cup in 2007 and three wins in the final of the League Cup (2005, 2007 and 2015).

He is available after leaving Manchester United in December. They were 19 points behind the league leaders at the time of his departure and he was involved in a high profile spat with star midfielder Paul Pogba.

Not only that, but his relationship with the media deteriorated. He demanded “respect” after the 3-0 loss to Tottenham, adding in his press conference that “I won more Premier Leagues alone than the other 19 managers (in the Premier League) together.”

There was also a touchline bust up following Ross Barkley’s 96th minute equaliser when United were held to a 2-2 draw at Stamford Bridge in October. Chelsea coach Marco Ianni celebrated the goal in front of Mourinho, sparking an angry confrontation.

He may want time away from football, but Chelsea know that he has played a significant part in the honours they have secured in recent years.

One that seems bizarre on the surface, but Leonid Slutsky has spoken previously of his friendship with Chelsea owner Roman Abramovich.

Slutsky is the current manager of Dutch side Vitesse Arnhem, who have a close working relationship with Chelsea. His only previous experience in English football is with Hull in the Sky Bet Championship. However, he lasted just six months in the vacancy with a 19% win ratio.

At the time Slusky joined Hull, Chelsea had sent a total of 21 players on-loan to Vitesse. Jake Clarke-Salter, Eduardo and Charly Musonda are the current players spending time temporarily at the Eredivisie club from the Blues.

Prior to accepting the job in East Yorkshire, Slutsky spoke of his relationship with Abramovich by telling ESPN: “I am very thankful to him for his help.

“I live in the Chelsea hotel, I watch a lot of matches because Chelsea give me tickets for each match. He has helped me adapt to life here.

“I always say that Mr Abramovich doesn’t have a project in Russian football now, so now his Russian project is me!”

Alongside that time at Hull, Slutsky has managed CSKA Moscow and Russia. During his time at CSKA, he won the Russian Premier League three times, alongside the Russian Cup and Russian Super Cup twice.