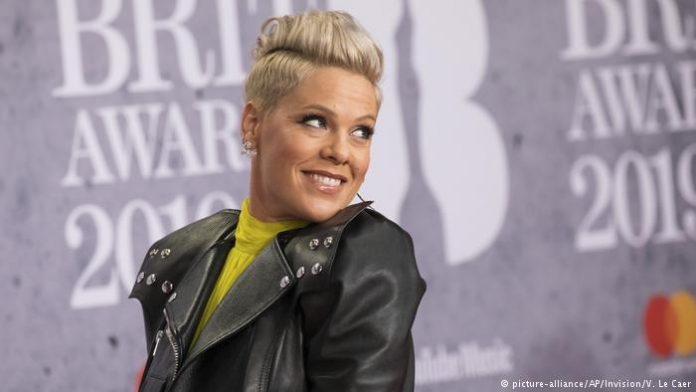 The Brit Awards have been criticized for sexism in the past, with a perceived lack of female artists involved in the UK’s top music industry awards event. This time around, organizers sought to address those concerns.

In terms of nominations, women outnumbered men for only the second time in the Brit Awards’ 40-year history on Wednesday, as organizers sought to address criticism that female talent was not sufficiently represented.

US singer Pink picked up the coveted annual award for outstanding contribution to music. The singer closed the show with a medley of her songs from her 20-year career.

“This is all too much, my dad’s really excited,” she told the crowd. “It’s beyond anything my brain can comprehend. It’s been an awesome journey.”

A raft of female artists performed ahead of Pink — whose big hits include “Just Like a Pill” and “Raise Your Glass” — with the guest list chosen in response to criticism about a dearth of female artists at last year’s ceremony.

The singer Paloma Faith was among those who criticized last year’s awards, at which many attendees wore white roses to symbolize the #MeToo movement. This year, Faith said she was “pleased” to see the situation remedied.

However, it was an all-male pop rock band which picked up two of the major awards at this year’s Brits.

Manchester four-piece The 1975 won best album for its top seller A Brief Inquiry into Online Relationships, as well as an accolade for best British group.

In keeping with the theme of the night, singer Matty Healy used one of his acceptance speeches to criticize misogyny in the music industry.

Calvin Harris was named producer of the year, and his UK chart-topping collaboration with singer-songwriter Dua Lipa, “One Kiss,” won the award for best British single.

The Carters — comprising the power couple Jay Z and Beyonce — won the award for best international group. The couple sent a video “thank you” message in front of a regal painting of the Duchess of Sussex, Meghan Markle.

The Brits have, in the past, had a reputation for scandal and farce. In 1996, Jarvis Cocker of the indie band Pulp stormed the stage in protest as Michael Jackson performed surrounded by children.