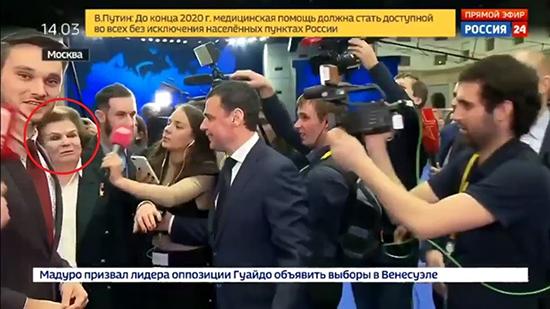 Russia Today
Valentina Tereshkova, a Russian MP best known for being the first woman to ever go into space, got a surprise journey of a kind, when a crowd of journalists swept her away from an interview.

The episode happened in the aftermath of Wednesday’s annual speech by President Vladimir Putin, in which he described the state of the nation to lawmakers and other political and public figures.

Tereshkova was supposed to give a live interview to a Russian news channel alongside with the governor of her hometown Yaroslavl region. But just as the correspondent started introducing the two officials, his colleagues in the background threw a monkey wrench into the proceedings.

About a dozen rushed after Finance Minister Anton Siluanov and left Tereshkova no other choice but to follow the crowd.

The MP, who also happens to have a rank of general major, rescued herself a few seconds later, although judging by her facial expression being almost snatched by the media crowd was not the most pleasant experience.