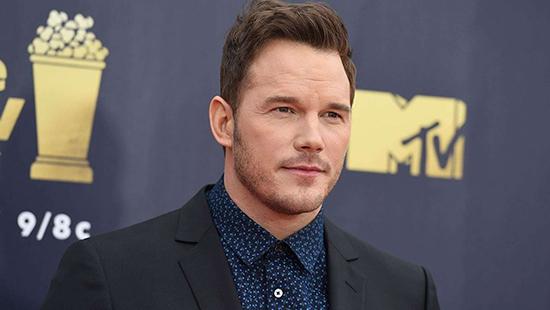 Chris Pratt revealed on his Instagram Story on Wednesday that he is following a 21-day diet based on the Bible, according to People magazine. (AP)

At a time where it seems like your career could be at stake if you publicly mention your religious affiliation, seeing celebrities come out of their biblical closet on social media is a breath of fresh air. This trend is not only surpassing Page Six, but it’s getting the interest of mainstream Hollywood producers, legendary rappers and visionary tech entrepreneurs.

When Pratt stood on the stage of the MTV Music Awards to accept his Generation Award, he delivered a captivating three-minute speech self-titled “Nine Rules From Chris Pratt, Generation Award Winner.” In typical Pratt fashion, he sandwiches bits of silliness around the message that he wants you to hear. “Rule No. 1, breathe. If you don’t, you will suffocate. No. 2, you have a soul, be careful with it. No. 3, don’t be a turd.”

He continues with some useful information on how to feed your dog medicine and how you should earn your way, before he brings arguably his riskiest piece of advice to the 5.2 Million viewers watching:  “Rule No. 6, God is real. God loves you. God wants the best for you. Believe that. I do.” Immediately followed by “No. 7. If you have to poop at a party, but you’re embarrassed [goes on to talk about pooping strategy at a party].”

At this point, the crowd is raucous with applause. “And finally, No. 9, nobody is perfect. People are going to tell you that you’re perfect just the way you are. You’re not. [pause for laughter] You are imperfect. You always will be, but there is a powerful force that designed you that way. And if you’re willing to accept that, you will have grace and grace is a gift. And like the freedom that we enjoy in this country, that grace was paid for by somebody else’s blood and do not forget it. Don’t take it for granted. God bless you…”  The crowd stands to their feet in applause as Pratt exits the stage.

Pratt’s Christian journey started long ago on the island of Maui, where a street preacher convinced the future Guardians of the Galaxy and Parks and Recreation star that he needed God.  At only 19 years old, and after dropping out of Community College in his home state of Washington, he accepted an offer from a friend to live with him on the Valley Island. Chris would spend his days smoking weed and drinking, followed by bunking up in a tent on a beach or his buddy’s van if there was room.

He was working just enough to get by as a server at the prestigious Bubba Gump, Maui. When one day a street preacher walked up to Pratt and his friends and asked: “What are you doing tonight?” Chris alluded to an unruly night of doing what they do best; drugs, alcohol and hopefully bunking up with a lady friend. The preacher invited the group to his church service as an alternate plan. Ditching his friends that night, Pratt became a Christian two days later.

Pratt is now a regular attendee of LA’s Zoe Church along several other A-List Celebrities. Zoe is similar in popularity to megachurches Hillsong & PlanetShakers, all of which could fall into a category vastly different from what non-church people would consider religious services.

Coming from a background where church almost seemed like it was supposed to be painful, I can see why millennials and Gen Z’ers are opting out of the whole ‘religion thing.’ As a man who’s attended Catholic Mass, I can say that my way knowing that church is working, is that you should feel some level of boredom throughout the service.

I can’t say that being forced to go to Mass was a great experience in my history of faith, and I’m definitely not alone when it comes to the countless millennials who grew up in their parent’s church or private schooling, only to slip out the second they’re outside their mother’s grasp. What Calvary, Hillsong and other modern churches are doing to attract millennials and celebrities is an incredible transformation of preaching and entertainment. Millennial-based churches are turning religion into a relationship, with the goal of bringing in anyone willing to listen closer to God, and isn’t that what church is supposed to be doing?

“We don’t use the word ‘religion,’ because it’s hard to get people excited about religion,” Carl Lentz, 35, the pastor of Hillsong told the NY Daily News. “Religion is dead. I don’t know anything about religion, I couldn’t help you. Religion has no power. But a relationship with God is a superpower.”

With a growing demand for life-altering faith-based content, these churches are conducting as many as six services each and every Sunday to audiences in the tens of thousands. The services aren’t in your traditional ‘priest in a pulpit’ format and the multimedia production rivals that of any Hollywood Studio. These services are extending even further beyond their live audiences with Hillsong alone producing music videos, daily messages and the like through their social media channels. Broadcasting to an exponentially larger audience around the globe. It’s the powerful message in a cool atmosphere that keeps the kids coming back. Much like the law of attraction, cool things attract cool people. Cool people like Justin Bieber, Kylie Jenner, Selena Gomez, Kevin Durant, Nick Jonas and Bono.

Bieber’s trials and tribulations have been well documented to say the least, but just to recap, 2014 was a big year for Justin… And not in the good way. Drugs, excessive drinking, trying to illegally import a pet monkey, spending a night in jail for underage drag racing… You know, normal stuff for a 20-year-old Canadian multi-millionaire.  It wasn’t until Hillsong’s pastor, Carl Lentz entered the picture that Justin was able to turn his life and image around for the better.  According to GQ, Bieber had a true coming to Jesus moment.

After looking in the mirror, he was ravaged by feelings of loss and fell to his knees, crying “I want to know Jesus.” Praying with Pastor Carl and overcome by the gospel, he said: “Baptize me.” After numerous failed attempts to find a private body of water to conduct a proper baptism, they ended up in Tyson Chandler’s (formally on the New York Knicks) bathroom, conducting the ceremony in Tyson’s oversized bathtub (he’s over 7 feet tall). The spiritual rebirth since carried over to the digital world through Christian messaging and support for his home church, Hillsong, throughout social media.  What once included lyrics that any evangelical would frown upon, he now posts cover’s from Hillsong’s home band’s music.

From Bieber to Snoop Dog. Snoop Dog may be one of the greatest rappers of our generation. What he’s not known for is Gospel music. Well, that was until March of 2018 when his Snoop Dog Presents: Bible of Love hit No. 1 on Billboard’s Top Gospel Albums Chart.  Not to be outdone, Kanye West is rumored to be producing a Gospel album of his own.

After posting a TMZ Live, 112 crooner Slim hinted that Kanye West could soon be dropping some new music with a totally different vibe. In his video, he strongly hinted at a Christian music collaboration between 112 and Yeezy himself. Recently, his tweets even allude to using apps to read the BIBLE and PRAY. Regardless of his previous shenanigans, I’m confident that the musical genius will be able to pull some more fire from his brain.

The demand for faith-based content is catching the attention of more than just A-List celebrities and musicians alike, with Hollywood Studios vying for underserved and discerning faith-based audiences. Such effort produced multiple surprise hits such as “Heaven Is for Real” and “God’s Not Dead.” Given their popularity, the rate of faith-based films released in theaters annually has doubled since 2012, to about 12 a year.  Still, the undefeated heavyweight in this category is Mel Gibson’s “Passion of the Christ,” which set the bar for religious-based films, grossing $611 million worldwide off of a $30 million budget.

Mainstream media and celebrities are starting to talk about their faith, more faith-based content is being produced than ever before, rappers known for their hardcore gangster lyrics are turning to Gospel music and these mega-churches are taking a step back from traditional religious services in order to elicit a positive experience for younger generations. So, what does this all mean and where do we go from here?

One problem that currently exists is lacking a central platform to organize and deliver this multimedia for audiences who are generally interested in faith-based content but are overwhelmed and don’t want to go to a church IRL (in real life). Digging through social media is like trying to find a diamond in a land-fill. Churches like Hillsong may have great content, but the community experience can’t be replicated online by a single entity, and sometimes people want to get content from other faith leaders… like Kanye West… just kidding, like Matt Chandler.

For anyone who’s ever asked, how can we get more young people to our church, the answer is being paved in stone by organizations like Hillsong & Zoe. In communities like Los Angeles and New York, where faith-based organizations must interact with their congregations on the go, technology is critical. Churches are using platforms like Instagram, Twitch, and pray.com to bring younger people together. And why not? It’s a good experience for everyone, celebrity or not.

You too can Make Faith Great Again through fun, entertainment and most importantly a relationship with the almighty. God is attracting celebrities, producers and tech entrepreneurs, which in turn is bringing even more young people through the doors of our churches, creating more impact on our community, and strengthening individual’s relationship with the Lord. Which, at the end of the day, is the whole point of sharing our beliefs, don’t you think?

Chris Carter is an adjunct professor at Pepperdine University, the author of “Become a Content Brand: Build a Team, Own Your Audience & Create Video Your Customers Will Love.” You can pray with him in his pray.com community, Marketing Morality.