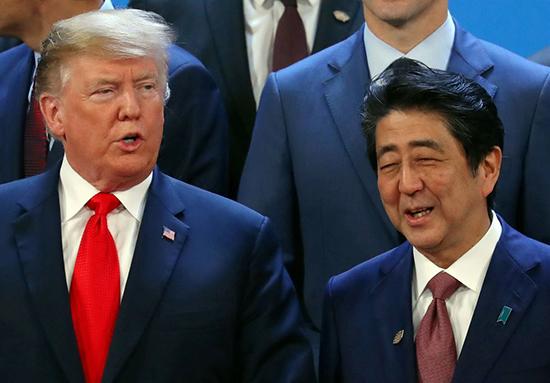 U.S. President Donald Trump is expected to visit Japan in May to meet with the country’s new emperor and then return in June for a G20 gathering, a White House official said on Wednesday after a phone call between Trump and Japanese Prime Minister Shinzo Abe.

Trump’s first visit will likely take place from May 26 to 28, when he is expected to become the first foreign dignitary to meet Crown Prince Naruhito after he succeeds his father, Akihito, as emperor of Japan on May 1, NHK said, citing Japanese officials.

Asked later in the Oval Office if he would be visiting Japanin May, Trump said, “I will be, at a certain time.”

Trump will also attend the Osaka meeting of the Group of 20 largest world economies in June, the White House official said.

Trump and Abe spoke by phone on Wednesday to coordinate ahead of the U.S. leader’s meeting next week in Hanoi with North Korean leader Kim Jong Un.

Japan’s Foreign Ministry said the two leaders discussed issues of mutual concern involving North Korea, including the return of Japanese nationals abducted by North Korea and the development of nuclear weapons and missile systems by Pyongyang.

They agreed to have another telephone conversation after the summit between Trump and Kim in Hanoi on Feb. 27 and 28, the ministry said.

Trump’s administration has been working with the political leadership of both Japan and South Korea in advance of his summit with Kim, as they work to help achieve the U.S. goal of convincing North Korea to abandon its nuclear weapons. North Korea has threatened to strike all three nations with nuclear weapons.

In remarks to reporters in the Oval Office ahead of a meeting with Austrian Chancellor Sebastian Kurz, Trump said he and Abe had compared notes on North Korea.

“I think we are very much on the same wavelength,” Trump said.

Abe has said Japan is committed to normalizing diplomatic relations with North Korea and has pledged to work with China to resolve tensions on the peninsula.

The Japanese embassy in Washington did not immediately respond to requests for comment.

Abe has worked to maintain close ties with the United States under the Trump administration. The U.S. president said recently that Abe had sent him a copy of a letter nominating him for the Nobel Prize, a comment that set off a controversy in Japan, where some have accused Abe of excessively flattering Trump.

Abe has since declined to say whether he had nominated Trump for the peace prize, but Japanese media have cited anonymous Japanese government sources as saying Abe nominated Trump at the request of the White House.

Since then, two Norwegian lawmakers have said they too nominated Trump due to positive developments on the Korean peninsula. (Reuters)