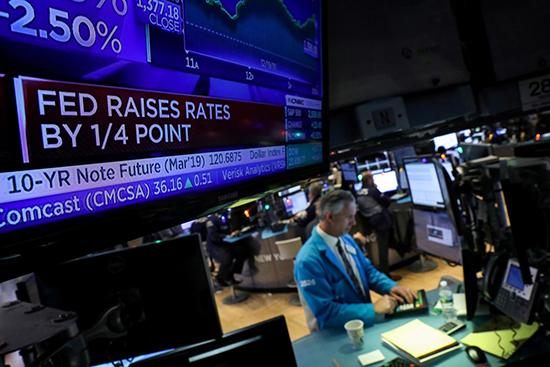 WASHINGTON (Reuters) – The Federal Reserve’s promise in January to be “patient” about further interest rate hikes, putting a three-year-old process of policy tightening on hold, calmed markets after weeks of turmoil that wiped out trillions of dollars of household wealth.

But interviews with more than half a dozen policymakers and others close to the process suggest it also marked a more fundamental shift that could define Chairman Jerome Powell’s tenure as the point where the Fed first fully embraced a world of stubbornly weak inflation, perennially slower growth and permanently lower interest rates.

Along with Powell’s public comments, Fed minutes, and other documents, the picture emerges of a central bank edging towards a period of potentially difficult change as it reviews how to do business in light of that new reality. One question, for example, is whether to make crisis-fighting policies a part of the routine toolkit. Another is whether to try to prepare the public to accept higher inflation from time to time.

Policymakers have debated for years how well traditional central banking fits a world transformed by the global financial crisis a decade ago. But it was a brief Oct. 3 remark by Powell that set off the chain of events which helped settle the matter.

“We’re a long way from neutral now, probably,” Powell said at a Washington think-tank event, referring to a level of interest rates that neither cool or boost the economy.

Though Powell was effectively summarizing what the Fed had just concluded at its Sept. 25-26 policy meeting, when it raised rates amid stronger than expected U.S. growth, his characterization touched a nerve.

Investors dumped stocks and bonds, fearing the Fed aimed to drive rates higher than they felt the economy could withstand.

It was the beginning of weeks of volatility that led the Fed to recalibrate its message, with more than one misstep along the way.

In doing so, the central bank went beyond fine-tuning its language or adjusting to changing conditions. Interviews with officials as well as analysis of Fed minutes and policymakers’ public statements suggest the emergence of a long-elusive consensus that interest rates would likely never return to pre-crisis levels, and that once established relationships, such as inflation rising when unemployment fell, no longer worked.

Concern that years of solid economic growth and falling unemployment would inevitably rekindle inflation or threaten financial stability have been a staple of Fed debates, but had largely disappeared by the Fed’s Dec. 18-19 meeting, according to a review of Fed meeting minutes and officials’ public statements.

It was a conclusion hiding in plain sight. After a year when the Trump administration pumped around $1.5 trillion of tax cuts and public spending into a full employment economy, the Fed in 2018 would miss its 2 percent inflation target yet again.

“I hate to say we were right,” Dallas Federal Reserve president Robert Kaplan told reporters on Jan. 15 in Dallas. “But we have been warning for quite some time that…the structure of the economy has changed dramatically.”

Technological innovation, globalization, and the Fed’s commitment to its inflation target all held down prices, and “those forces are powerful and they are accelerating,” he said.

Later in January, the Fed’s policy meeting jettisoned mention of any further rate increases and cited “muted inflation” among the reasons, largely aligning the Fed with the prevailing sentiment among investors who saw conditions weakening.

At first, it was investors who appeared to have overreacted to Powell’s “long way from neutral” remark in early October.

Global markets had absorbed nearly two years of quarterly Fed rate increases in stride, but yields on U.S. 10 year Treasury bonds spiked a tenth of a percentage point that day and stocks started a slide that wiped out 10 percent of the S&P 500’s value by late November.

If sustained, It was the type of environment, with asset values falling and borrowing conditions tightening, that could hurt the Main Street economy and not just the investor class.

The initial response from Powell and others at the Fed was that the U.S. economy remained strong, and that it was not the central bank’s job to coddle Wall Street.

“We watch markets very carefully,” Powell said at a mid-November event in Dallas. “But it is one of many, many factors that go into a very large economy.”

But investors were not just reacting to the Fed and the prospect of higher rates. Weakening business and consumer confidence, slowing global growth, and potential disruptions from President Donald Trump’s trade war with China also factored in.

Over the next few weeks the Fed tried to build those concerns into its policy stance, but it became clear the situation was more fragile than they had divined.

In early December a portion of the bond yield curve “inverted,” with short term rates rising above long term ones in what can be seen as a loss of faith in economic growth.

For months, Fed officials had debated whether to discount such developments as the clash and clang of daily trading or to treat them as a significant warning. Some, including Bullard, warned against ignoring what markets seemed to be saying, and both he and Kashkari said the Fed should stop raising rates or risk trouble.

When the Fed met in December, policymakers thought they could square the circle.

Officials proceeded with another quarter-point rate increase, as expected at the time, and released updated projections showing two more rate hikes for 2019 – one less than in September, but still heading higher.

The Fed hoped, though, that between a small change in its policy statement and Powell’s follow-up news conference, things would stay calm, a strategy Fed officials spelled out after the fact in interviews and in minutes of the December meeting.

By replacing the phrase that the Fed “expected” further rate hikes with one saying it “judged” them likely, the central bank tried to show it was now less committed to tighter policy.

But that nuance was lost on markets, and Powell’s assurance at the news conference of a newly “patient” Fed got lost as well when he described the Fed’s monthly rundown of as much as $50 billion in assets as on “automatic pilot.”

To investors, that undermined the intended message, since the regular decline in the Fed’s asset holdings effectively worked to tighten financial conditions.

Investors felt the Fed was “not fully appreciating” how market turbulence and “softening global data” put the U.S. itself at risk, the Fed’s January minutes concluded in reviewing how the December statement was perceived.

“It was a delicate time,” New York Fed President John Williams told Reuters on Tuesday. The tweak in the December statement “was a pretty subtle message. That’s one of the challenges of trying to communicate a very complicated and complex situation in just one page.”

Over the next few weeks, the Fed eschewed subtlety for a more public acknowledgement that its view of economic reality had changed.

For a Jan. 4 question-and-answer session at the American Economic Association Powell came armed with written notes and a core message that the Fed was “always prepared to shift the stance of policy and to shift it significantly” if conditions weakened.

After the January meeting that message became official. References to the new “patient” approach and “muted inflation,” words cited in minutes of the December meeting, became part of the Fed’s policy statement. A longstanding mention of the need for higher rates was deleted.

The changes drew no dissent, with even those who have worried most about inflation and financial risk falling silent.

It was a significant moment of unanimity at a central bank that has spent the last decade wondering when, rather than whether, inflation or financial risks would re-emerge. Throughout that era some group of officials – including Powell early in his central banking career – has consistently warned that the combination of falling unemployment, cheap money, and trillions of dollars injected by the Fed’s crisis era policies would inevitably cause problems.

As the Fed’s January meeting minutes showed, not all officials have sworn off further rate increases and some noted that a possible turn for the better – a resolution of trade tensions for example – could lead them to raise rates again.

But to veteran Fed watchers, the bar is now higher. The January statement, JP Morgan analyst Michael Feroli wrote recently, showed the Fed “subtly but profoundly evolving” to a new view of the world where a variety of forces have changed the way inflation and interest rates work, and have now changed how the central bank responds.