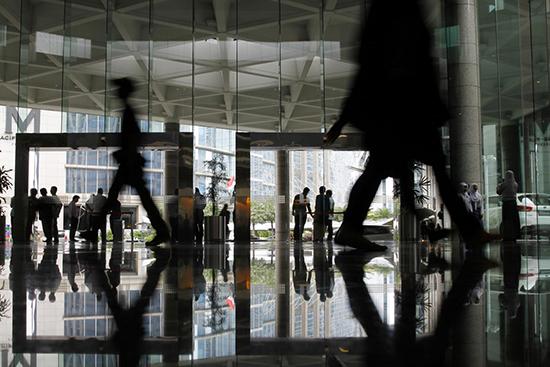 SHANGHAI (Reuters) – Shares in Asia slipped on Friday as a deteriorating global economic outlook outweighed further signs of progress in trade talks between China and the United States.

After inching higher in early trade, MSCI’s broadest index of Asia-Pacific shares outside Japan fell into the red as more markets opened across the region, dipping 0.1 percent.

Chinese blue-chip shares were down 0.1 percent in late-morning trade after briefly breaking into positive territory.

After surging on Monday on optimism over trade talks, China’s major equity indexes have faltered on investor concerns over slowing domestic growth and on indications that Chinese authorities will resort to a benchmark lending rate cut only as a last resort to boost the economy.

Growth in China’s new home prices fell to a nine-month low in January as broader economic weakness increasingly weighs on the property sector.

Japan’s Nikkei was down 0.4 percent after data showed core consumer inflation accelerated slightly in January but remained far from the central bank’s 2 percent target, underscoring the fragility of the country’s economic recovery.

A combination of trade talks and Federal Reserve caution over further rate hikes has provided support to riskier assets, including equities, in recent sessions, said Rob Carnell, chief economist and head of research, Asia-Pacific at ING.

But with a more dovish Fed and some sort of trade deal already priced in, further developments on trade “haven’t really been having anything like the impact in markets that they would have done a week or a couple weeks or months ago,” he said.

Nevertheless, investors continue to closely watch high-level talks between U.S. and Chinese trade negotiators in Washington, with little more than a week left before a U.S.-imposed deadline for an agreement expires, triggering higher tariffs.

Reuters reported exclusively on Wednesday that the two sides were drafting language for six memorandums of understanding on proposed Chinese reforms, progress that had helped to lift investor sentiment.

Amid the trade discussions, new data from the U.S. Thursday highlighted its economic outlook is also growing cloudy.

Moreover, the U.S. Mid-Atlantic factory sector fell into contraction territory in February for the first time since May 2016, data from the Philadelphia Federal Reserve showed.

“While global manufacturing is weak, services activity is looking more positive. But it is difficult to see manufacturing and services diverging for long,” analysts at ANZ said in a morning note.

“There are strong multiplier effects from manufacturing that imply downside risks to the services sector, particularly in Europe. And trade uncertainty, which is overhanging the manufacturing sector, needs to be resolved.”

The yield on benchmark 10-year Treasury notes edged lower to 2.6842 percent Friday, compared with a U.S. close of 2.688 percent on Thursday as a bump from investor optimism about trade talks progress ebbed.

The two-year yield, watched as a gauge of expectations of higher Fed fund rates, eased to 2.5224 percent from a U.S. close of 2.529 percent.

The Australian dollar rebounded after tumbling more than 1 percent Thursday on a Reuters report that China’s northern port of Dalian has placed an indefinite ban on imports of Australian coal.

On Friday, Reserve Bank of Australia Governor Philip Lowe cautioned against seeing restrictions as being directed at Australia, and Prime Minister Scott Morrison said the ban does not point to a souring of ties between the countries.

Separate comments by Lowe that a rate hike may be appropriate next year also helped to boost the Aussie dollar.

The dollar index, which tracks the greenback against a basket of six major rivals, was steady at 96.602

Gold rebounded after falling more than 1 percent on Thursday, with spot gold trading up about 0.2 percent at $1,326.30 per ounce.