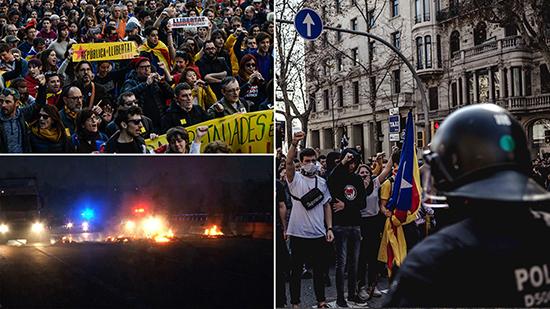 Pro-independence activists in Catalonia are venting their anger at Madrid’s trial of the region’s provincial leaders. Baton-wielding police scuffled with some of the demonstrators as people also blocked roads and set tires ablaze.

The group behind the protest is called the Committees for the Defence of the Republic (CDRs) and has been involved in demonstrations against Spain’s central government for months. The goal of Thursday’s action is to ‘paralyze everything,’ as the group put it.

The protesters managed to disrupt traffic on several major roads with barricades of burning tires. They also interfered with the work of local railroads and occupied an office building in Girona, a city some 100km (62 miles) northeast of Barcelona.

One of the clips captured a group of officiers restraining a proteter, clad in a yellow vest, lying on the ground. The protester is then dragged away as bystanders shout their disapproval.

The CDRs are rallying supporters to defend the jailed leaders of Catalonia, who are currently being tried for organizing an independence referendum in October 2017.

The central government accused them of sedition and rebellion as well as misappropriating public funds to hold the plebiscite. The defendants face lengthy jail terms of up to 25 years if convicted, but their supporters say they are prisoners of conscience.

By Thursday evening, almost 50 people had been reported injured across the region, including at least 16 police officers. Four arrests were made during the day, the security forces said.

The 2017 independence vote which Madrid called “unconstitutional” prompted bloody clashes and mass arrests as police forcibly blocked citizens from entering the polling stations, fired rubber bullets and deployed tear gas. The police crackdown which was condemned by the UN and Human Rights Watch for “disproportionate use of force” resulted in over 800 people being injured across the region.