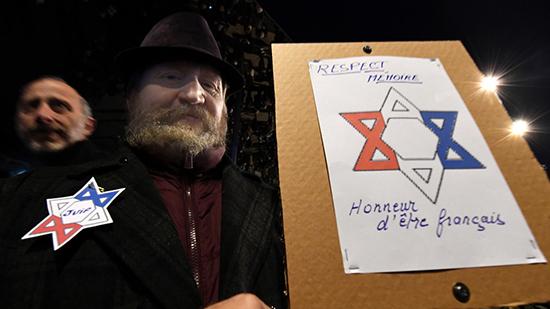 French President Emmanuel Macron’s vow to outlaw “anti-Zionism” as racism has less to do with actually fighting hate crimes and more to do with courting votes, according to French commenters.

“Anti-Semitism is hiding itself behind anti-Zionism,” Macron said Wednesday, speaking at the Representative Council of French Jewish Institutions (Crif) and announcing that France seeks to define “anti-Zionism as a modern-day form of anti-Semitism.”

Macron’s declaration comes after a spate of anti-Semitic incidents and attacks in France, ranging from swastikas daubed on Jewish shopfronts earlier this month, to the brutal murder of an elderly Holocaust survivor last year.

However, independent journalist Luc Rivet told RT that anti-Zionism and anti-Semitism are not entirely the same thing.

“Anti-Semitism is clearly a form of racism and must be banned,” Rivet said. “I would be reluctant to condemn anti-Zionism as being the same. Many on the extreme left, including some Jews, are against the state of Israel as it is being led at the moment. They don’t like a country based on race and religion.”

While anti-Semitism has existed since Biblical times, anti-Zionism emerged in the late 19th century as a reaction to the Zionist political movement. Founded by Theodore Herzl, the movement advocated the creation of a Jewish homeland in Palestine, then under British control.

Still, with attacks mounting and French Jews feeling increasingly unsafe, Macron has been forced to tackle an issue that he has been accused of doing “nothing” about. Both Rivet and Rochedy, however, see his latest statement as a political stunt.

“I think for him it is political theater,” said Rivet. “It is not clever to link anti-Semitism and anti-Zionism, it is not the truth.”

“Mr. Macron should stop playing theater,” Rivet continued. “He is a very bad actor, and he has enough problems.” With Macron’s popularity at rock bottom, the embattled president’s statement is an attempt to court the Jewish vote ahead of this May’s European Parliament Elections, the journalist added. Although Macron himself is not up for election, his En Marche! party has recently lost ground to far-right rival Marine Le Pen’s right-wing National Rally party in pre-election polls.

“It’s theater, positive,” said Rochedy. “It’s theater because they do only very small things, and they keep welcoming Muslim immigrants to France…who hate the Jews. You cannot be so friendly with Muslims and claim to fight anti-Semitism.”

Ancient animosity has been a factor in some of France’s most high-profile anti-Semitic attacks. The Muslim man who stabbed and burned 85-year-old Holocaust survivor Mireille Knoll last year was motivated by anti-Semitic beliefs, prosecutors said. One year earlier, another elderly Jewish woman, Sarah Halimi, was killed by a Malian man who shouted, “Allahu Akbar” before throwing her out a window. A year before that, a gunman pledging allegiance to the Islamic State (IS, formerly ISIL) terror group killed four people in a Kosher supermarket in Paris.

Among the attacks perpetrated by Muslims, anti-Semitism and anti-Zionism are equal motivators, Rivet claimed. Indeed, anti-Semitic attitudes and opposition to the state of Israel are most prevalent and most interlinked in the Islamic world, according to a global survey by the Anti-Defamation League.

“I think it is clear that most of the incidents are due to the Islamic attitude to Jews,” Rivet said, “and the fact that the territory of Israel is disputed with the Palestinians.”

As the neverending battle to define where anti-Zionism ends and anti-Semitism begins rages on in French political and media circles, the country’s Jews are still being targeted. Whatever the motivation, anti-Semitic attacks rose by 74 percent last year, with 541 cases reported.

Some of France’s Jewish community have had enough. Since 2014, more than 20,000 of the country’s roughly half a million Jews emigrated to Israel, where citizenship is a birthright for anyone of immediate Jewish descent.