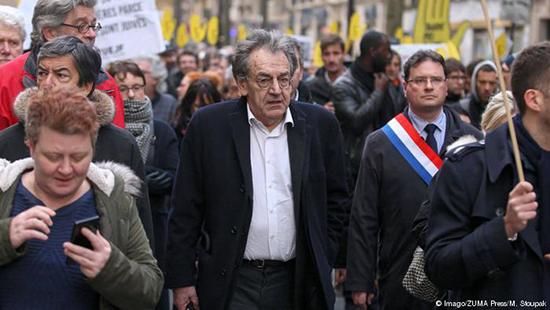 The anti-Semitic attack on the philosopher Alain Finkielkraut in Paris has shocked Europe. But people who are genuinely surprised must not have been paying attention to the events of recent years, DW’s Martin Gak writes.

The images of the attack on Alain Finkielkraut on Saturday on the streets of Paris have all the hallmarks of the postcards of the type of mob violence against Jews in the streets of Europe less than a century ago. The sight of an elderly man in glasses being cornered by a mob of uniformed marchers was one of the most arresting spectacles that the rising tides of trans-Atlantic anti-Semitism has brought to the beaten shores of our liberal democracies. But this image of the sovereignist and nativist nationalism that, after turning on immigrants, has now returned to attend to its more traditional object of loathing should come as no surprise.

If anything, these episodes sit snugly in the catalog of horrors that include the Alternative for Germany (AfD) party head’s reference to the Holocaust as “bird shit“; the Polish government’s aiding and abetting of neo-Nazi groups at their annual independence march in November; the attacks on Jews and Jewish institutions in Hungary by the government; the shutting down of a Jewish community center in Umea, Sweden, last summer after it was besieged by neo-Nazis; US President Donald Trump’s exculpation of anti-Semitism in Charlottesville in 2017; and, of course, the massacre in Pittsburgh in October.

Anyone surprised by the turn of events has evidently not been paying attention. While sporadic expressions of anti-Semitism by Muslims have translated into an endless roster of studies and polls on perceived Islamic attitudes toward Jews, the US and European populist right have built their demands of sovereign liberation on the tried-and-tested anti-Semitic specter of the international Jewish conspiracy. And, more often than not, they have even blamed Jews for Muslim immigration.

From Washington to Budapest, The Protocols of the Elders of Zion, the anti-Semitic magnum opus on which everything from Russia’s pogroms to mass murder in Nazi concentration camps in Poland was planned and executed, has been dusted off and put back into use by nationalist parties: The international Jewish cabal bent on fomenting economic wars, financially enslaving the common man, promoting the destruction of Christian values and destroying the identity of the nation is back.

Hungarian Prime Minister Viktor Orban, Nigel Farage, Marine Le Pen’s associates in France, Trump and senators from his Republican Party, members of the AfD, and the Sweden Democrats party have all breathed new life into the idea of the Jewish threat. These were indeed the set of charges hurled at Finkielkraut in Paris: “France belongs to us” — and not to you, you treacherous Jew.

But it is not just the mobs. Farage, a right-wing member of the European Parliament from Britain, used almost the exact same words to describe the US-Hungarian banker George Soros as Henry Ford did in his 1920s pamphlet series, “The International Jew: The World’s Foremost Problem.” Farage said the Jewish financier represented “the biggest danger to the entire Western world.” The warning about the “threat” of the international Jew would be difficult to mistake.

The Protocols of the Elders of Brussels

And yet no anti-Semitic campaign has been as forthcoming in its intentions as Orban’s against Soros. Now his Fidesz party has gone a step further. It is not just Orban who demands that Hungarian voters give his party a mandate to defend the country from the Jewish threat — he also demands the mandate to help dissolve what the party now portrays as its instrument of global dominance: Jean-Claude Juncker’s European Commission.

In a photo reminiscent of the anti-Semitic caricatures of olden, Soros and Juncker smile side by side. The line below them reads: “You have the right to know what Brussels is planning to do.”

Orban is now openly involved in an anti-Semitic campaign against the European Union, which he portrays as a tool of Jewish domination. Plain and simple. The question that has been raised is whether Fidesz should still be welcome as a member of the European People’s Party, the European Parliament’s conservative bloc, to which Juncker belongs. However, the more pressing question is whether Hungary, with its current government, belongs in the European Union at all.