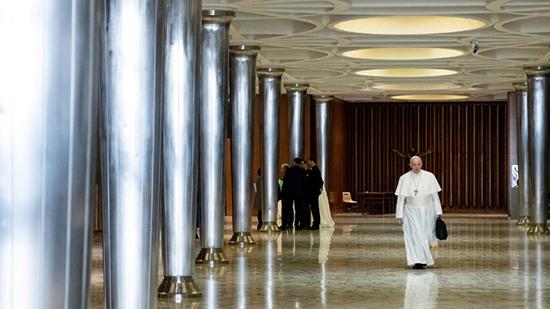 Pope Francis wants “concrete” change over the Church’s child sexual-abuse scandal. It won’t be easy, though.

ROME—Pope Francis opened a highly anticipated meeting about the sexual-abuse crisis in the Catholic Church with remarks that were strong, brief, and to the point. “The holy people of God looks to us, and expects from us not simple and predictable condemnations, but concrete and effective measures to be undertaken. We need to be concrete,” he said.

But how to be concrete? In this seemingly never-ending tragic story of minors sexually abused by prelates and a pervasive culture of cover-up, even today the gap between words and actions remains complicated. The Church has historically seen this as an issue of sin and forgiveness, not crime and punishment. And whereas canon law, which is designed to adjudicate prelates, not to protect children, leaves tremendous room for ambiguity, civil law is generally far more clear on how to prosecute abusers—and includes the crucial concept of consent.

So it was striking on Thursday to hear two of the conference’s opening speakers use the term crimes in no uncertain terms—a marked change from Vatican rhetoric of the past. “An essential aspect of the exercise of stewardship in these cases is the proper interface with civil jurisdiction. We are talking about misconduct that is also a crime in all civil jurisdictions,” said Archbishop Charles Scicluna of Malta, who spent a decade as the Vatican’s top investigator on abuse cases. He later said it was important for the Church to move “from a culture of silence” to “a culture of disclosure.”

The give and take between Church and state can also be opaque. Even today, in the most advanced democracies where the crisis has erupted—the United States, Canada, Australia, Germany, France—the decision for a diocese to report an abuser to the police is still a matter of interpretation and context, not canon law. Seventeen years after the sexual-abuse crisis erupted in Boston toward the end of the papacy of John Paul II, and after it reemerged in 2010 under Benedict XVI, Church norms on the issue are still difficult to understand, not just for outsiders, but for the clerics who must uphold them.
Nicole Winfield, who as Vatican correspondent for the Associated Press knows this issue inside out, this week published a lucid encapsulation of the opacity. For instance: “In countries where clergy are required to report child abuse, bishops and superiors of religious orders are supposed to notify police when someone alleges that a priest molested a child and they are supposed to cooperate with any investigations,” she wrote. “However, the policy is nonbinding and only was articulated publicly in 2010 when the Vatican posted it on its website. Prior to that, the Vatican long sought to prevent public law enforcement agencies from learning about abusers in the clergy.”
It may not seem a revolutionary act to call a meeting that’s essentially a consciousness-raising exercise for prelates, reminding them of existing laws, but when those laws themselves are so confusing, and when the Vatican itself has not taken great efforts to clarify them, it’s a step forward for an ancient institution.

The pope began this meeting by handing the 190 attendees a list of 21 “reflections” to consider. They include creating an accessible guide for bishops, instructing them in how to handle abuse cases; discussing whether the punishment is commensurate to the crime; and “debating whether priests and bishops guilty of sexual abuse of minors should leave public ministry.” Asked whether these were instructions or points to debate, Archbishop Scicluna laughed, but said, “It’s an understatement to say that they have to be taken seriously.”

This week, Monsignor Scicluna said he was pleased that the Congregation for the Doctrine of the Faith, the body that defends Catholic doctrine, increased the number of canon lawyers from 10 to 17. In the past, Francis has said that the CDF handles about 2,000 cases at a time. The backlog is enormous. The numbers are chilling. The Holy See has said that in the past decade, 3,420 credible cases of abuse worldwide were reported to the CDF, while in the United States, the Catholic Church has said that 6,900 priests have been credibly accused since 1950, according to BishopAccountability.org, an advocacy organization.

The conference may be a step in the right direction, but it’s also tantamount to the human-resources department of a major corporation holding a conference on sexual-harassment claims—the understanding is that the laws are designed to protect the institution, not the victims. Of course, the Catholic Church is not a corporation; it traffics in souls, and so it’s on every side of the issue here—it is the abusers and the abused.

It was also significant that the attendees watched painful video testimony from victims from around the world, including Africa and Asia. One woman testified that she had had a sexual relationship with a priest for 13 years, starting at age 15, and that he had forced her to get three abortions because he refused to use birth control. “I feel I have a life destroyed,” she said, according to a transcript provided by the Vatican. “He gave me everything I wanted, when I accepted to have sex; otherwise he would beat me,” she said.

If any prelates from around the world—and inside the Vatican—had not yet opened their eyes to the extent of the crisis, it would be hard to remain ignorant after this meeting. Making these victims heard inside the Vatican, and holding the meeting itself, is a political act on the part of Francis. In his opening remarks he called the meeting an opportunity “to discuss together, in a synodal, frank, and in-depth manner, how to confront this evil afflicting the Church and humanity.” Prelates are encouraged to air their views and concerns. Ideological differences will emerge. As such, this conference anticipates any future conclave. Francis inherited this crisis, and his successor will too.