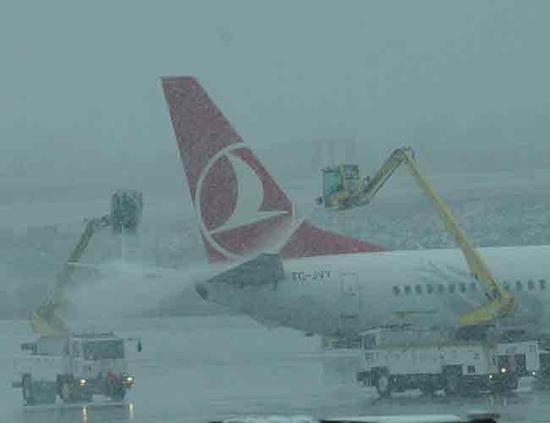 Istanbul and the region of Thrace in Turkey’s northwest were hit on Feb. 23-24 by heavy snowfall and strong winds which caused flight and ferry cancelations.

Turkish Airlines canceled its 66 international and domestic flights taking off from Istanbul’s Atatürk Airport on Feb. 23-24 due to the weather conditions, said local media citing the company’s office of press counsellor. Also due to the de-icing process at the airport, some flights were delayed.

Istanbul Governor Ali Yerlikaya issued a statement on Feb. 24 on his Twitter account, saying that crews from the Metropolitan Municipality’s disaster coordination center, AKOM, were on duty for the road transportation not to be disrupted.

“We expect our drivers and pedestrians to be careful against possible negative situations,” he said.

A statement released by AKOM said that temperatures dropped 8-10 degrees Celsius in Turkey’s northwestern provinces over the weekend, down to between -1 and 2 degrees.

“For the citizens not to be negatively affected by the snowfall, the Istanbul Metropolitan Municipality is continuing its works to remove snow and drop salt on D-100 TEM highway, and main roads through its 7,083 personnel, 1,357 vehicles; 147 tractors for the village roads; and 33 snow removal vehicles on the metrobüs [Istanbul’s 50-kilometer-long bus rapid transit route] path,” the statement said, adding that five tons of salt were scattered on Istanbul roads throughout the weekend.

“Some 327 people are accommodated in the facilities of the İBB [Istanbul Metropolitan Municipality] as a part of a winter service provided for homeless citizens,” it said.

The heavy snowfall and strong wind also knocked down some trees across the city. A tree collapsed on a garden wall in Acıbadem neighborhood in Kadıköy district on Feb. 24, leading the locals to notify the fire brigade crew. The fallen tree was then cut into pieces with a saw and taken off the site.

Meanwhile, many provinces in northwestern Turkey were also covered with snow over the weekend, leading to slick travelling conditions.

Roads to some 27 villages in the Kırklareli province were blocked due to the heavy snowfall.

Despite some of its negative effects, the snowfall presented picturesque scenes for those who fancied winter season. Many children were seen enjoying the weather playing snowball with their friends. Even adults have joined them, making snowpals.