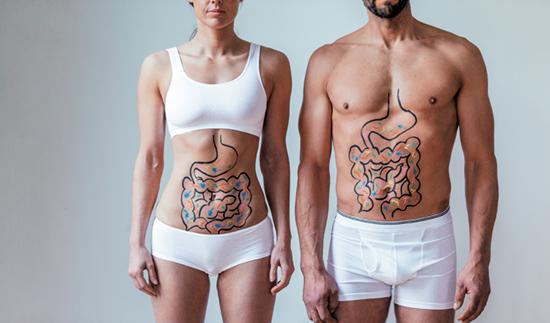 Combating a cold by getting enough sleep, itchy eyes from hay fever, catching chicken pox as a child once, but seldom twice—all these phenomena result from the actions of our immune system, whose function it is to removes foreign substances from our bodies and whose work is indispensable for the maintenance of the human body.

Researchers have recently become increasingly interested in the intestine’s connection to our immune system. The gut is actually packed with some 60 to 70 percent of the body’s immune cells, meaning it functions as the immune system’s “control tower” while still serving as a digestive organ. In addition to various types of immune cells, the gut also contains something else indispensable to our health: The human intestinal tract is home to 500 different types of gut bacteria, totalling some 100 trillion organisms in total. Together, they constitute our intestinal flora, a virtual ecosystem that suppresses the infiltration of pathogens (germs) into the body.

Immune cells and gut bacteria, both of which live in the gut, used to be considered mutual enemies. The common scientific belief was that the purpose of the concentrated nature of the immune system within the gut was to fight gut bacteria. But as research has progressed, experts now believe the two cooperate in various regards, with gut bacteria now found to be deeply involved in the maintenance of the entire body—something once regarded as the purview of the immune system. Researchers have taken particular note of the collaboration between the two as they try to find ways the intestinal environment can be enlisted to boost our immunity more effectively.

While each person has a different set of intestinal flora—which also change with age—the most influential factors are environmental, including diet. As a result, much attention has focused on the idea of taking food supplements to improve the probiotic (i.e., intestinal) environment.

The prime example of that is lactic acid bacteria (LAB), also known as acidophilus. Contained in large amounts in yogurt, LAB regulates intestinal function and has long been associated with boosting immunity. Russian microbiologist Élie Metchnikoff (1845-1916), who won a Nobel Prize in 1908 for his research on immunity, paid particular attention to the long, healthy lives of Bulgarians, explaining it as the effect of the LAB contained in the yogurt that they regularly ate.

But it was not until recently that the mechanism by which LAB activates the immune system was understood: The key is the polysaccharides produced by gut bacteria, which are related to the dietary fibers in sticky or viscous foods, such as the polysaccharides abundant in Chinese yams, mozuku seaweed, okra and mulukhiyah (tossa jute). They are ingested into the body by the microfold (M) cells scattered across the lumen (membrane) of the small intestine, from which they cross over to the dendritic cells (a type of immune cell) that lie in wait directly under the intestinal membrane. M cells are able to transfer the metabolic products and/or dead bodies of gut bacteria into the body, along with various pathogens or germs, without changing their shape or characteristics.

The dendritic cells, having recognized the polysaccharides, then activate the protein interferon gamma, which regulates the immunity function. That protein is believed to stimulate so-called “natural killer” (NK) cells to attack pathogens and cancer cells. People with highly active NK cells rarely get infections or infectious diseases and enjoy low incidences of cancer.

Though many kinds of food are known to boost immunity, LAB are in a class of their own, now that the mechanism has been clarified of their directly reinforcing the immune activity within the gut, and its effectiveness having been confirmed, according to Professor Kazuyoshi Takeda of Tokyo’s Juntendo University Graduate School Center for Biomedical Research Resources (CBRR).

However, not all lactic-acid bacteria is equally effective. Of all the different types of LAB, one type has captured the attention of academics for the prodigious amounts of polysaccharides it produces: 1073R-1 lactic acid bacteria, or simply R-1. Multiple large-scale studies using yogurt fermented with R-1 have shown to boost NK activity (an indicator of the ability of NK cells to attack and destroy cancer cells), while also significantly reducing the risk of catching a cold.

The benefits of polysaccharides don’t end there: There are two stages of immunity—innate and adaptive immunity. Innate immunity represents the immune system’s first line of attack, with NK cells and others patroling the body as “soldiers,” scouting for and attacking enemy organisms. Adaptive immunity involves pinpoint attacks made by an elite corps of immune cells that can vanquish powerful pathogens. That kind of immunity can be fortified through specific vaccinations aimed at pathogens, such as influenza and German measles (rubella).

Traditionally, attempts to boost immunity through probiotics was aimed at increasing innate immunity. However, recent research has demonstrated that the polysaccharides produced by LAB are also effective in reinforcing acquired immunity, as well.

In an experiment performed by Professor Takeda’s team, 40 male college students were divided into two groups, then injected with influenza vaccine, to see how yogurt with R-1 LAB influenced the efficacy of the vaccine.

One group was given yogurt with R-1 for three weeks before and approximately ten weeks after being vaccinated, while a second group was given a placebo and vaccinated. When the two groups were compared for changes in antibody values (that is, the ability to attack specific pathogens), more than 40 percent of the first group had a seroconversion rate exceeding the level necessary for the antibodies to conquer the virus, more than double the level of the second group. In other words, it was confirmed that R-1 increased the efficacy of the vaccine.

“As dendritic cells are activated [by the polysaccharides] before the vaccination, once the vaccine enters the body the immune cells of the acquired immune system are believed to gain the ability to issue strong commands,” explains Takeda.

Given how powerful LAB are, researchers now believe that intestinal flora as a whole can have an even greater effect on health. Multiple studies have underscored the correlation between the balance of intestinal flora and the existence of specific gut bacteria on the incidence of conditions like diabetes and obesity, as well as on the efficacy of various medicines.

One example is the much-discussed PD-1 protein, whose discovery by Kyoto University professor Tasuku Honjo earned him the Nobel Prize in Physiology or Medicine in 2018. PD-1 puts the “brakes” on immune cells, helping to prevent autoimmune diseases. But PD-1 can also prevent the immune system from killing cancer cells. Now, pioneering treatments have been developed that interrupt this “brake” and allow the immune system to prevent cancer cells from proliferating. It doesn’t work for everyone but last year, Professor Jennifer Wargo and her team at at the University of Texas MD Anderson Cancer Center published an article in the scientific journal Science determining that the treatment was most effective for patients who have variegated intestinal flora, as well as having specific gut bacteria. “It is not so difficult to alter a person’s intestinal flora through such methods as diet, probiotics, and fecal transplants into the intestine,” says Wargo. “This discovery has opened up great new possibilities [for cancer treatments].”

Although it’s not entirely clear why such a correlation exists, scientists are engaged in a fierce competition to unravel the mystery. The day may come when a new common sense—that is, the knowledge that the key to the prevention and treatment of illness is changing the gut’s internal environment—will change medical science.