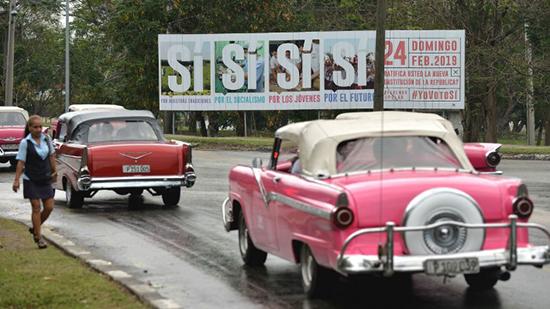 Cubans have given their backing to a new constitution that paves the way for modest economic reforms but maintains the one-party system, in the biggest expression of public opinion in the country for more than forty years.

On the political front, the document limits the president to two five-year terms but does not open the door for Cubans to election their leader themselves, with the Communist Party remaining the central political force in the country.

According to France 24, “the proposed changes reflect the gradual opening of Cuba since the fall of its former benefactor, the Soviet Union”.

Eight million Cubans were eligible to vote on Sunday, with most pre-ballot predictions suggesting around three-quarters would back it.

“Anything but a wide margin of victory would be viewed as a rare rebuke of the communist-run government’s policies,” says CNN.

The news network reports that “across the island, government supporters have placed signs on buildings, doorways and school buses urging people to vote for the constitution, while there have been few – if any – public displays supporting a “no” vote”.

However, while the debate may have been stacked in the government’s favour and the result was a foregone conclusion, Jose Jason Nieves, editor at the non-state media outlet El Toque, told Al Jazeera it was “a unique opportunity because it will allow us to know what percentage of the Cuban society will start to express dissent”.

No opposition parties are allowed in Cuba, “but in the deliberation over the proposed constitution, religious groups on the island have taken a lead in criticising the government plan, revealing a level of influence they have not previously demonstrated” says NPR.

Catholic bishops in Cuba were particularly outspoken, issuing a joint statement earlier this month that noted how the document “effectively excludes the exercise of pluralist thought regarding man and the social order”. Cuban evangelicals also expressed their opposition to the new constitution because they feared it could open the way for gay marriage.

In response, Mariela Castro, the daughter of party leader Raul Castro and a leading member of the National Assembly in Cuba, shared a post on her Facebook page calling the church “the serpent of history.”

“Debate over the constitution has dominated politics in the country for months” reports Reuters, “even as it struggles with economic stagnation and as the deepening crisis in Venezuela brings its ally into the crosshairs of the US President Donald Trump’s administration”.

A week after the US president claimed Cuba was a “captive nation” and that “socialism is dying”, Cuban President Miguel Diaz-Canel said the referendum was taking place as recent events in Venezuela highlighted the symptoms of an “imperialist threat” towards the region.