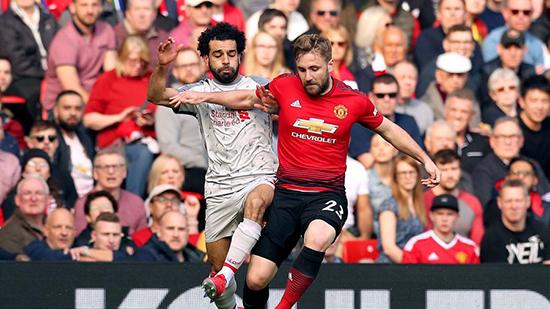 There were no goals but plenty of talking points from Sunday’s game at Old Trafford. Paul Higham looks at whether it really was a good point for Liverpool and what that performance says about Manchester United.

Four injuries in the first half made for a scrappy game, and in the second half it was Liverpool dominating possession but being unable to find a breakthrough while United defended manfully and had a few good chances themselves.

It all ended goalless and a frustrating afternoon for Jurgen Klopp’s side, although the point earned does put them top of the table again having played the same amount of games as Manchester City, but was it a good point or not?

Let’s look at that and the other main talking points from the big game.

A point earned or two dropped for Liverpool?

This is the big one, but in truth we won’t really know the answer until the end of the season – as James Milner rightfully pointed out straight after the game. Jurgen Klopp also alluded to it as well and added that the point would have seemed better before the game than after it.

Such was United’s flying form, a point in the Old Trafford cauldron on the face of it may not be the worst result, but after the catalogue of injuries the Red Devils suffered it looked like they were there for the taking, especially at the end of the first half.

It could have been no points had Chris Smalling converted a golden late chance, but under the circumstances it’s a game Liverpool should have been winning if they want to go on to win the Premier League.

There’s also the confidence booster they missed out on, with a win at Old Trafford arguably being worth more than two extra points given the huge lift it would have given Klopp’s men going into the title run-in.

It’s not all doom and gloom though, and worried Liverpool fans would do well to just take a look at the league table they currently sit on top of at this stage of the season – there’s still plenty to get excited about.

It also should be remembered that this is a pivotal week in the title race, not just a pivotal day in the title race, and if the Reds come away from games against Watford and derby rivals Everton next Sunday with seven points in total for the week, or are still top of the Premier League, then it’ll still be a great week for them.

Lack of cutting edge a worry

Liverpool have had a few problems of late breaking down defences, which is a two-pronged problem for Klopp as his front three haven’t quite hit their stride while there’s a distinct lack of goal threat coming from midfield.

Roberto Firmino could well miss a few games after limping out injured and that now gives Klopp a testing time figuring out a Plan B for his team going forward – especially given that both Mo Salah and Sadio Mane were way below par at Old Trafford.

Fabinho, Henderson and Wijnaldum did okay as a midfield trio defensively, but going forward there’s a lack of attacking intent either from runs beyond the front men, shots from outside the box or defence-splitting passes to trouble United’s defence.

Keita, Shaqiri and even Lallana may have a part to play coming up as Klopp re-jigs his side to cover for Firmino’s absence and tries to find an attacking threat from a deeper role – which always helps when trying to break down deep-lying defences.

There was a lack of rhythm for Liverpool on Sunday – Klopp admitted so himself, with the final ball, pass and even set piece was severely lacking against United, and also in Bayern in the Champions League in another stalemate.

This could just be one of those things, but could there be a case to be made that Liverpool have suffered from having not enough games recently, as crazy as that sounds when fixture congestion is often cited for challengers dropping out of contention at this stage of the season.

Out of both domestic cup competitions, Liverpool have been away on TWO warm weather breaks – a move many thought would help get the squad in the best possible shape heading into the latter stages of the season, but in their last two games you could easily describe some of their play in the final third as rusty.

Players often say that they get into a rhythm of playing twice a week and it may just be that the breaks away have only served to interrupt that rhythm and too much training without competitive action has just taken the edge off Liverpool’s play. With three huge games coming this week we’ll see how they respond.

Just like the PSG game, Solskjaer had to cope with multiple injuries during a huge match, but this time he came through them with flying colours as his makeshift United side hardly conceded a chance to Liverpool during the game.

In fact, the home side had the better chances and on another day they’d have been celebrating a famous victory – but the draw almost felt like a victory in itself under the circumstances.

It’s the most high-profile job interview in history but Solskjaer remarkably remains unbeaten in the Premier League and can seemingly do no wrong – this could be the best draw United have ever had against Liverpool and he only enhances his claims to get the job full time.

What he can also point to at the end of the season is the vast improvement in United’s defence as he starts to make his impact on the squad. They’ve had three clean sheets in a row in the Premier League and have stopped Liverpool, Chelsea and Tottenham from scoring.

Matic missed the Liverpool game while Lingard, Mata and Herrera all limped out and Rashford hobbled through almost 90 minutes with a dodgy ankle on Sunday – all four of them could miss a few games coming up.

It’s not the toughest of fixture lists coming up but a trip to Crystal Palace on Wednesday will be tricky, even if a home tilt against Southampton is the most friendly of games for a team having an injury crisis.

United lost fourth place to Arsenal on Sunday and with so many player struggling they need to make sure they keep picking up points in the next few games to avoid slipping too far behind their rivals for the top four – Chelsea can also go above them if they win their game in hand.

It’s another test for Solskjaer but one he seems to relish.

Feel-good factor well and truly back at Old Trafford

The atmosphere was bordering upon the toxic at Old Trafford under Mourinho, but Solskjaer, and a few wins of course, has turned things around dramatically, leading to a wonderful atmosphere throughout Sunday’s game.

The manager, the players, and the fans all seem to be pulling in the same direction right now, with the support from the stands spurring the players on to produce some wholehearted performances on the pitch.

Paul Pogba and Romelu Lukaku need special praise for both putting in real shifts on Sunday, something not readily associated with those two in particular, and those types of performances do not go unnoticed by the fans.

Not many have truly doubted the wealth of quality in this United squad, especially going forward, but couple that with graft and discipline and you have the makings of a serious team.