A safe zone in Turkey – Syria‘s border should be under Turkey‘s control, President RecepTayyip Erdoğan said on Feb 23.

In a televised interview jointly broadcast by CNN Türk and Kanal D, Erdoğan said Turkey is the first country to be affected by the heavy gunfire. “I will take my precaution in the opposite country,” he added.

The Turkish president said peaceful and stabilized environment built in Syria‘s Afrin, Jarabulus and al-Bab provinces should be sustained in border regions.

“It is important for us that the U.S. decision to withdraw from Syria does not lead to developments against the interests of our countries and Syria‘s political unity and territorial integrity,” Erdoğan said, adding that a vacuum after the withdrawal to be replaced by terrorist groups is unacceptable.

Erdoğan said the Adana Agreement – signed between Ankara and Damascus in 1998 – allows Turkish forces to conduct operations inside Syria near the Turkish border.

Syria has only just begun to emerge from a devastating conflict that began in early 2011 when the Bashar al-Assad regime cracked down on demonstrators with unexpected ferocity.

Last December, Trump made a surprise announcement that the U.S. would be withdrawing all of its troops from Syria and said the ISIL had been defeated in the country.

Touching upon Turkey-Egypt relations, President Erdoğan said he will never meet with such a person referring to Egyptian President Abdel Fattah al-Sisi.

“[Mohammed] Morsi took office with 52 percent of votes in elections, but then he was overtaken. Now, Morsi is in jail with his friends,” he said. “I have always said that al-Sisi was a coupist for years.”

He went on to say that the execution of 42 people under al-Sisi was unacceptable.

Turkish President said he may visit the U.S., or President Donald Trump may pay a visit to Turkey after March 31 local elections.

Erdoğan added that he has a “positive relationship” with U.S. counterpart Trump.

Turkish defence minister warns US against vacuum of power in Syria 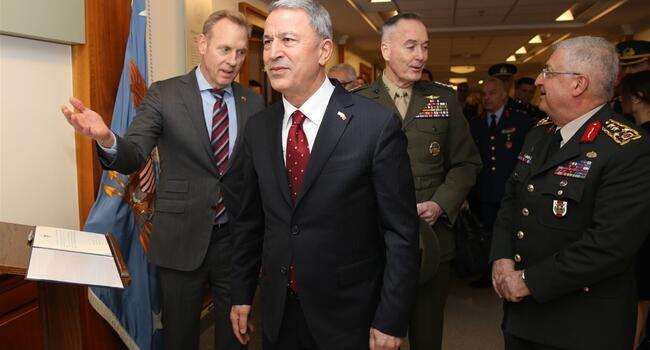 Talking about Turkish Defense Minister Hulusi Akar’s visit to Washington, Erdoğan said Syria and bilateral relationship between the two countries was the focus of the meeting.

President Erdoğan also said the European Parliament’s decision to suspend accession negotiations with Turkey did not have “any value” for Ankara.