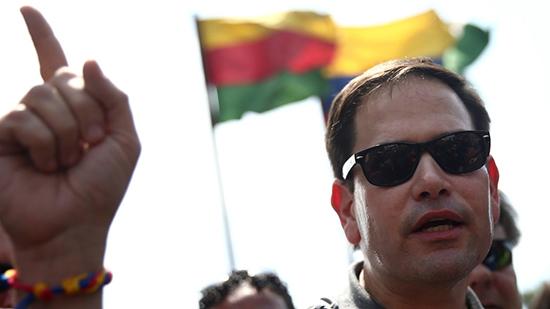 US Senator Marco Rubio has posted a picture of the brutal murder of late Libyan leader Muammar Gaddafi in a less-than-subtle threat to Venezuela’s Maduro. Twitter blasted Rubio as a manic warmonger… who has extremely poor taste.

The two pictures –one showing Gaddafi while still in power, the other showing the Libyan leader being tortured minutes before his brutal murder– were posted by Sen. Rubio (R-FL) on Twitter without any caption. Yet, given his open calls for an armed insurrection in the Latin American country to depose President Nicolas Maduro, the message was clear.

Openly threatening a head of a foreign country with a brutal death at the hands of US-propped militants was, apparently, just a tiny bit off: while a few Twitteratti supported Rubio’s vision of Maduro’s demise, the majority blasted the senator over an extreme lack of taste or decency.

Some argued that any account spewing warmongering propaganda at such a rate would likely be suspended – if it did not belong to a US Senator, of course. “Marco Rubio just posted a violent, graphic death threat. If any of the rest of us posted this, we’d be suspended for it,” journalist Bill Palmer tweeted.

Many noted that Libya is not the best example of the US bringing its democracy overseas, but arguably the worst one. With the slave trade there on the rise, the country is effectively fractured into several warring statelets, with gangs of armed ‘democrats’ fighting for control.

Apart from the pictures of Gaddafi, Rubio posted a similar split of Manuel Noriega – the de facto ruler of Panama in the 1980s. Once a valuable CIA asset who’d helped Washington in arming the Contras of Nicaragua, Noriega was ousted during the US invasion of the country. Needless to say, the invasion claimed many lives, while Noriega spent the rest of his life in prison.