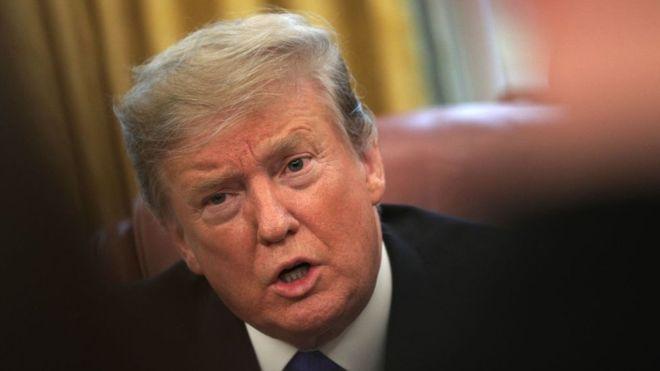 North Korea could become one of the world’s “great economic powers” if it relinquishes its nuclear weapons, US President Donald Trump has said.

Writing on Twitter, Mr Trump said the nation had “more potential for rapid growth than any other”.

Mr Trump will meet North Korean leader Kim Jong-un for the second time on the 27-28 February in Hanoi, Vietnam.

“We both expect a continuation of the progress made at first summit in Singapore,” Mr Trump tweeted, referencing the meeting between the two leaders in Singapore last June.

Chairman Kim realizes, perhaps better than anyone else, that without nuclear weapons, his country could fast become one of the great economic powers anywhere in the World. Because of its location and people (and him), it has more potential for rapid growth than any other nation!

Speaking at the Governors’ Ball – a black tie event for US state governors – on Sunday evening, the president also said he had developed a “very very good relationship” with Mr Kim.

He reiterated that he was “in no rush” to press for North Korea’s denuclearisation. “I don’t want to rush anybody. I just don’t want testing. As long as there’s no testing, we’re happy,” he said.

The Singapore summit was historic as the first meeting between a sitting US president and a leader of North Korea, but the agreement the two men signed was vague on detail. Little has been done since about their stated goal – finding a way to get nuclear weapons off the Korean peninsula.

The president’s latest remarks come on the eve of his departure for Vietnam, and are being seen as a bid to manage expectations.

What did Pompeo say?

Mr Trump’s secretary of state, Mike Pompeo, has similarly downplayed what could be achieved at the summit. On Sunday he told Fox News: “We may not get everything down this week, [but] we hope we’ll make a substantial step along the way.”

In a separate interview, he also appeared to contradict the president’s stated view that there is no nuclear risk from Pyongyang.

“But the president said he doesn’t,” Mr Tapper said, to which Mr Pompeo responded: “That’s not what he said… I know precisely what he said.”

In the aftermath of the Singapore summit last year, Mr Trump tweeted that “everybody can now feel much safer than the day I took office. There is no longer a Nuclear Threat from North Korea”.

Just landed – a long trip, but everybody can now feel much safer than the day I took office. There is no longer a Nuclear Threat from North Korea. Meeting with Kim Jong Un was an interesting and very positive experience. North Korea has great potential for the future!

North Korea has long insisted it will not give up its nuclear arsenal unless the US removes its troops from South Korea.

Mr Kim has now departed for Hanoi by train, and Mr Trump is expected to leave for Vietnam later on Monday.